The great cover art (by Karmazid) describes what you get pretty much, in other words you will get some
- Hellish turbulent Nordic witch crafting trolls dancing around the black boiling cauldron - 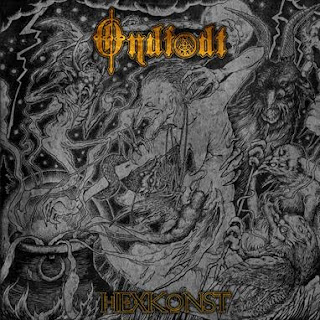 As this is a mainly Finnish based horde the vocals though is in Norwegian and also the music sounds like it could come from the same country...not that it matter though because its a great slab of primitive occultism here to both entertain... and irritate its surrounding nature hehe.

To be more technical i would say you get a slower and more groovy Arckanum (not all to correct alternative but thats what echoed in my old cranium) but with added insanity like the ones that can be found on for example the Ancient Records (ex: Bekëth Nexëhmü, Grifteskymfning etc) but with more a rocking coherent structure, the vocals is the most fucked thing on this release as they differs from traditional good raspy vocals to some mocking mental gnome screams and shouts!

Best songs is by far  track 5 & 6, number five with its really speedy morbid devil attack vibe and the other with some really depressing tunes that goes pretty far down...ah and dont forget that cold but splendid piano outro! Top stuff!

haha surely it makes me laugh and i feel all in all that careless psycho dancing around the fire in the winter forest up north suits this album "Hexkonst" to 100%, an almost forgotten folklore where evil lurks behind every tree and the stones is really sleeping trolls.

Production is spot on and let all parts meld together just right, semi raw and punchy!

I hope the band or what is left of them will struggle on and continue because it would be a shame if they just
vanished now...