First time i hear this band from Australia, before this Ep starting from 2011 they released one demo, one single and one full album. Ok first off i got to say that i have often a problem enjoying  many post BM (that includes to much from the "-core" related vocals or rhythms), to upbeat melodic or heavily keyboard orientated symphonic BM & much of the DSBM...

That said this band (at least on this Ep) has mixed quite freely with much of the stuff i dont often like....so i should hate this...but i dont really.

The actual music is very well handled with a nice and powerful balance between soaring and crushing parts, the musicians knows what they doing and they bring forth one grand well layered & solid 22 minutes song, the title of it i think means in Latin: Power of life and death... for extra atmosphere they use piano parts and starts of with classic "winds in the forest" sounds .(and also somewhere in the middle and ends with that as it all comes in full circle.) Besides the borrowing of  BM soundscapes one can also find traces of heavy metal and some pagan roots.

As taste is subjective i must say the vocals was not bad but too whiny and to much "crying hardcore" sounding for my stomach but worst i think is the lyrics...it is so upbeat forest hippy that i might found "deep" when i was in my early teens but not now no...yeah i am an old bitter Strigoi i know.
I wonder why the band like to label itself as Black Metal when it has really nothing to do with  Black Metal, its just not enough to sing about the forest and life and death and have some BM looking band logo... invent some new band genre instead, cant hurt. 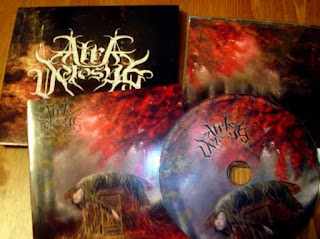 Anyways if you are a person whom like different types of blackened post/core-metal then this is not half bad.