Long time no see/read huh? Hehe Well life happened and shit but i am still alive and i have done some fun stuff while i was away from here like this new soon to be released printed zine! Release date is soon and i will post here when its out for purchase. Also release 30 (Kirous) is now out also from triumphant Cadaver, seak out Hateworks in Germany they sell it there as it is also a co-release with them. 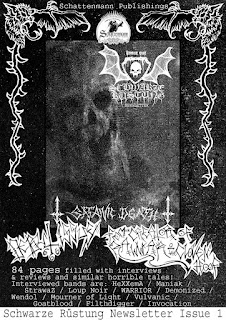 Celtic Dance / Blutkult - We Are the Roar of Thunder

Here we have a split with two strong black metal bands, first we get the German band Blutkults offerings which is four blunt and cold hymns which works as a European soldier stomping around the front lines, Junker continues his bleak black/Rac hybrid song style which he has perfected from years of loyal duty in this black metal "krieg", solid stiff upper lip material.

The musics atmosphere sounds almost like he is carving a giant hehe (not like Gaahl but in his own way of course.) and if i would pick out my favorite tracks it would be the first and the last here which has the most memoriable compositions for me. A plus for nice guitar solo leads that he incorperates as it gives the experience an extra depth to it. 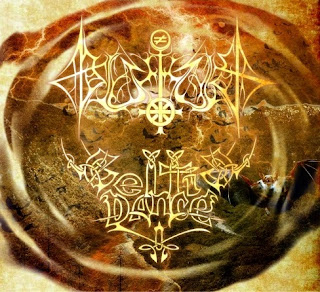 Next up we have Celtic Dance from Portugal with three tracks but i see them as one long song really as the first is an intro (a nice vampyric organ playing with added militant and tribalistic drummings) and the last is an outro( acustic melodic picks from the main track that fades slowly away) and the middle one is the main metal meat.... it carries this release title and it does not let you down!

Their music here is in mid tempo (but faster the BK material) and is semi raw (vocals is the most raw and is mixed in to the music nicely and has a raspy crow like quality to them which fits perfect) the whole thing is well done and engaging with a  90´s smoking ambience, towards its end a pretty long moody acustic part concludes this in a good somber way (brings my thoughts to Bathorys Twilight of the Gods somehow) and this leads naturaly into the outro.

Solid material from both of them and even if their styles is different they work great together, it has a bit like having both old and new soldiers fighting for the same cause but with different weapons.

...And after this i got even more eager to listen to both bands recent releases that i have missed. 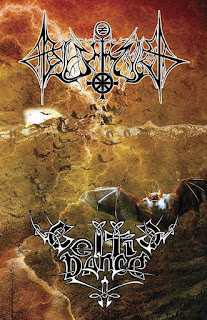 So here we have the second and newest release from the French death metal band Iron Flesh, my previous experience with the band was from the two first ep´s where i had the honor to do the artwork to & logo. They where solid promising heavy (and groovy) old school death metal which included inspiration from different "schools" the Swedish among others....But i had not heard their first full album so i listen to that before i started to digest the new one so i could review it as good as i could.

What i found on the first album was a continuation of what i expected but better as an whole then....i got a little confused hehe as songs like Red Sky Aeon had a very Iron Maiden style riffing (but tuned more in deadly fashion) it worked but was lite odd but i understand when writing a full length one dont want to fall into traps like repeating the same formulas and become boring and such so one try to think outside the box (or coffin in this case hehe) so i get why they include stuff like this then on the next to last track of the first album the intro is a kind of clean singing reminiscent of some D&D heavy metal band and here also the guitar part reminds me of something to find in nwobhm bands but with death metal growl vocals.

So going into the new album i was prepared for death metal but with inclusions like mentioned above. 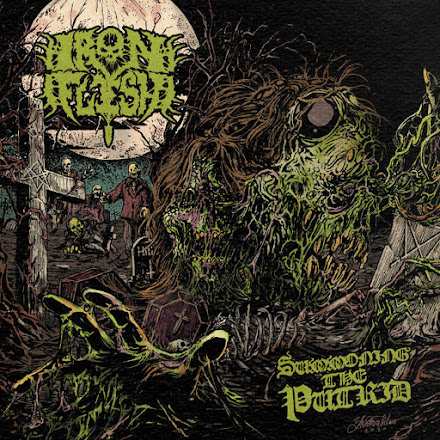 It starts off in a nice action packed ugly death metal banger that get your taste for intestines come back !

And the follow up has some of the bands best riffs och compositions, headbanging in Entombed style (getting a feel like i get on the Uprising album) Good stuff!

And the third track Demonic Enn  is also one of the bands best songs, really heavy chugging riffs that takes your inner visions to fields of zombies dragging themselves forward slowly towards your impending doom, as the band said themselves "We recently played this new track live and Magick happened instantly, one our favorite track to play live !"  I can totally see that.

Fourth song is a banger too and picks up the speed again and here the "outside the box" inspirations start to pop up like some Maiden like guitar parts, works neat though.

Next one even includes some dark spoken words that reminds me of Type O Negative(well not THAT deep as Pete but still)  hehe,  the tracks wanders around a bit around this part and the shouted vocals sounds more like the band shouts together the lyrics...this "group shouting/mixing" will be quite common during the rest of the album, this type of vocals reminds me a bit of some modern hardcore like Gallows (post Frank era) Even som music towards the end where the slower and heavier songs takes place reminds me of some bleak doomy hardcore...this is not a bad thing for me even if i feel the pure death metal atmosphere gets lost (that was in the start of the album)...... Could one call this a crossover band, perhaps not really but if the bands goes more and more towards this direction i personaly would class them as crossover band, then again if thats a good or a bad thing its up to you.

Heavy, bleak but same time bleeding emotions i pick up in the feelings conveyed here, like i can picture me that during live gigs the audience will shout along and embrace that unity of epic emotions.

In the end this album contains some of the best material the band has done but also some of the songs that  leave the pure death metal arena and tries new things. (for the bands past sound i mean)

So i would say this is the best release from them from a creative point of view as they really put in work and evolved further into their own future, at one time i thought to my self if some songs here could be classed as melo-death? Dont know as i dont activly listen to that genre but some parts/songs/compositions have a very melancholic (but not so dark really either to be called depressing) melodic sound and not just ugly rotten death vibes.

All in all this is a good album, a good piece of metal for sure.

Oh and that cover art by the ever great Skaðvaldur is awesome  but the putrid rotten look (and title) suits for the first songs really the best but then again one cant have more then one cover for a release  heheh so i understand why they went with this piece. 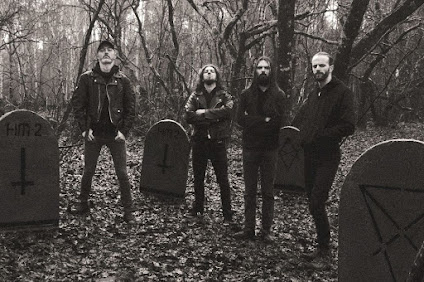 Damn this is a nasty tape!

....Imagine if Ed Gein was a satanist priest and was in charge of a blood sacrifice farm and then some sick ones got the job to put a sound-track to his jolly days of murder and sodomy ...yeah that how this sounds like.

This is a kind of a heavy chugging (also sometimes groovy!) horror/gore grind sung and screamed in French & Latin (yeah the vocals is diverse all from the guttural barks to hysteric screams, good shit!) It is primitiv in form and soul but also deeply in love with satanic ritual abuse and it is quite cinematic in its structure and atmosphere with all kinds of sound details like farm noise (pigs mucking about etc and some lady getting here innards visited by some sweet demonic prince) so its evident the boys have put in quite some effort into this project to make its experience be as poignant and revolting as possible. 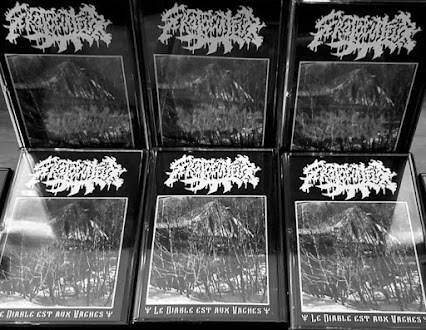 Also some jew´s harp is thrown in for good (wrong turn) measure haha yeah its unpleasant and gritty and you will have to take a shower after listening to this.

Last time we visited the atmospheric fields of Odvas it was in a calm place of comfort.....some time has gone and now (fitting our times) it has sunk into a colder & uncertain place. 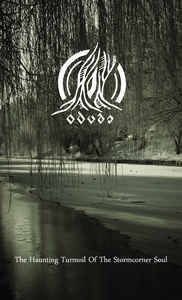 As i experienced the last piece of Odvas it felt that the "wanderer"(the listener) had after a long walk gotten to a needed place of rest and peace...I hope "he" rested his bones enough as this new chapter has dragged out something more dark and grand....feels almost like one hovers around a huge castle dome during the first track, as always details in the ambience is present to embellish the journeys tapestry  and pin point some specific distant feelings of unease.

Now in the second track i feel the gates is opening to the castle and one is swept inside!

A higher present almost sacral atmosphere is now sweaping all around as one is traveling through the castle streets....the hostile feeling is now left ...as of now but....

...The third and last track signifies an encounter of some darker form...some pounding drums and screams in the distance... feels like this was a trap!

Yeah the wanderer has surely gotten into something dangerous and hard to escape from...Cold dry winds flow through the lower chambers of a prison as we leave for this time this story.

Yeah so these descriptions is from my own head listening to these songs and if they are anywhere close to the artists visions i cant say....but then again i think this type of music is almost made for the individual listeners personal mind paintings.

Another good ambient/atmospheric soundscapes from Odvas released by Perverse Homage. 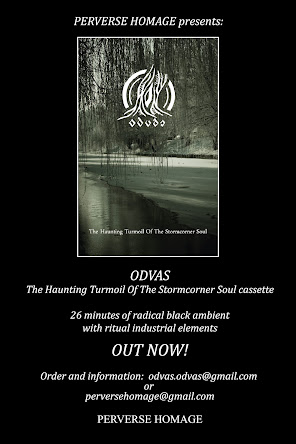 Mail me for order 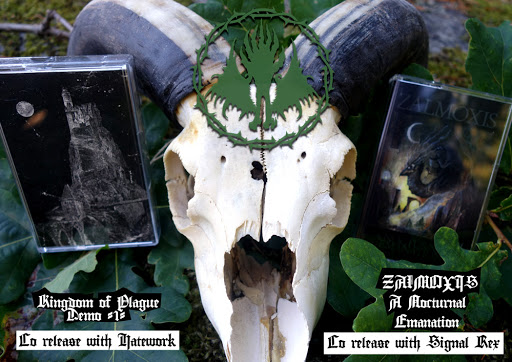 Well well here we have some music to raise hell to in the good old way!

...By that i mean this band could just as well been dragging their spike knuckles along the streets back in the 80´s, and more then ever Venom is the gods for inspiration and worship here!

...And that pretty common for many bands that has a first wave black/Thrash direction (which also have a healthy dose of heavy metal in it of course) so there is many bands that is to same and safe due to this but after hearing this EP i lost track of time and got into it just as one hopes to be. (but many times dont)

I have not heard all their releases so i cant compare it to all but to me this is their best material, it has its own world and it feels natural in its very British metal sound (but they are from Canada) Strong material from start to finish but if i have to pick some tracks its 3 & 5, they hit the sweet spot many times and is recomended to fans of this genre or metal people in general.(only missing now is a bad VHS taped music video ;) )

Love the cover art also,makes my think of high school D&D sessions hehe.(and i did the band logo art :D)

self release it looks like (could be sold out any time now!) 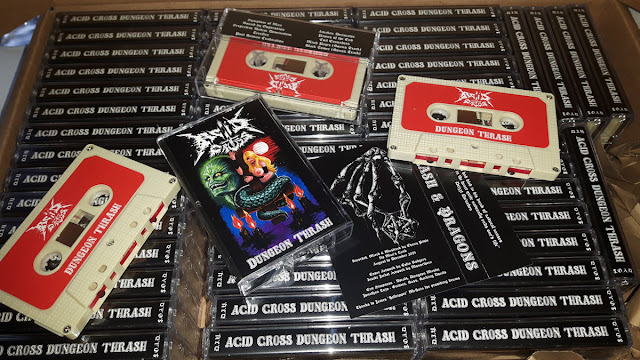