With an omnious drooling intro we are kicked into this first full album from these Chilean maniacs!

Few days ago i reviewed their compilation cd and enjoyed its filthy demonic death/Thrash-metal so it felt just logical to do this one close after.

They have been around for soon 10 years so this first album saw a long time coming but i think it was worth the wait as its totally swell! (in its specific old school genre)
The biggest difference i say compared to their older stuff is that they have a much more serious tone and approace and is more slicker/tighter played (not there was any problem before), gone is much of their older groovy Thrash parts and jumps straight for your throat and try to strangle you with death and disorder haha.

Yeah one of the things i really liked with the older material was their intensive headbanging grooves but they handle this new more straight faced direction well and there is no sortage of killer riffs and sweaty compositions.
Sometimes bit more cavernous (but in a sharply cut cave and not a damp and moisty one) but just slight....and i bit more war"ish" attack here! Hats fly out of the window! haha
Some nice guitar solos and drum fills etc, they all feel at home with their instruments (and in the Devils livingroom) so in the end i would say this is a solid hellraizing release that burns all the way!

The only thing would have done is taken out 1-2 tracks for a split or a 7" to be released sometime close around this album release, it is a bit long as it is now (just my restless soul here itching haha) but all songs are good  so they deserve my whole attencion... 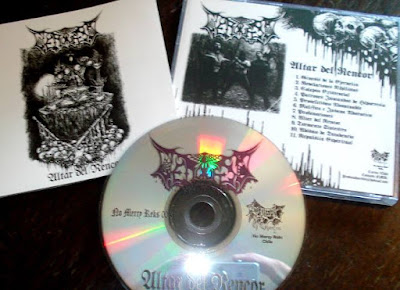 If you like this type of music or already enjoy their previous releases try Altar del rencor!