Take a sharp knife and prick your eardrum apart then pour this melted satanic tape into your brain! 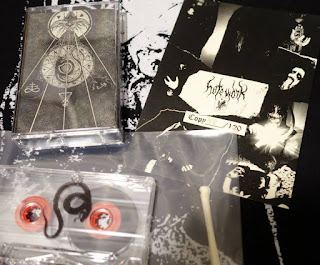 A raw sliding mental disaster but with good rythm and bestial blues
insane varied vocals, self destructive with a base of afterlife curiousness perhaps but
for sure there is a need of cracking open the physical body and leave this
flesh prison for whatever reason(not that it is hard to find reasons).
a plus for the intense ending.

As i have been a fan of IM (Mexico) some years now i can still claim IM
has not lost its way or soften down, this perticular track
has an more somber and mid paced tempo with introspective lean...
but with fiery hights and lows, bleak and screachy raw. Another
cut in the idea of "self".
Good as always. If you have not listen to them make sure to look
up their previous material also (well that goes for all bands here)

This is could be the most raw song productionwise...perhaps a rehearsal
but it serves as a good cloak for this unknow(to me) band to
strike out! it has a semi wall of noise in mid peace that hammers
on with a slight but nice use of melody, vocals has a very out spaced
echoing effect on it so the experience gets even more ghastly and
creates more levels down into the smog. some fitting keybords
shows up a bit into the whole blender. A surprising and interesting
song even if its nothing really new. Got me intrigued to look after more from
them.This has a sneaky but firm aura of doing great things in the future...

A melancholic but still barbaric raw black metal from Germany, screaching vocals
go well (as before) with the rest perhaps a bit more vicious (then before). Song goes
through some interesting variations, from attack to drowning then back....a bit more
mental then early songs which works great. Would be very interesting to see what they could do on a full album release.
A solid slab of evil meat!

Here is another band i have enjoyed quite a bit in the last say 2 years, the is second in line if you range ttem in rawness and also like  Xzælthu has some spacy effects on the vocals that make it sink deep in shit. Both traditional sound for the band and not... i like its very dissonant murky vvampyric sewer sound.
A fitting and killing end of a great split-collection of current raw bm bands.


Released by Hateworks (in conspiracy with Perverse Homage)