This is a special release due to its mystical and forgotten past, the major of this album is a recent discovery from early 1900. It was found deep in a undisclosed forest in Switzerland.
From what was found one learned that this was recorded by a different kind of  human breed that had a flair for human blood and composing melodic and melancholic troll humping songs, nowadays these "humans" is only told about in obscure fairytales....but they was real back in the past.
Swamp troll troubadours is one way of describing them. 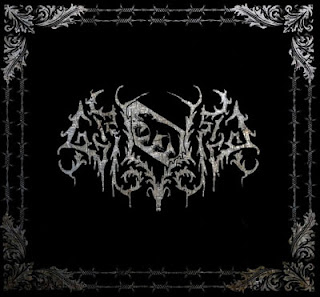 ....ok well after that delerious introduction over to the actual music, from the start i felt at home as the starter track feels very Chotzä with its jumping and pumping black metal rock, same with second song but here things start to surprise you with some amusing jazzy scatman vocal bridge thrown in and the ever so present guitar solos make themselves a prominent part. In general i dont despise solos or love them either but if they are infused well into the song and makes melodic sense compared to the rest of the song its great for me and here (even if there are quite many) they are done well even great sometimes. (yeah some solos are super like the one in song 6!!)

It feels very connected to the "street" just as i feel Chotzä does even if it has an ancient atmosphere the old past is still existing in our blood and our lands soil...dont matter how many layers of concrete or asphalt is put on our lands our past will never die.

I understand why this music was put under a new monicer and not used for the next Chotzä material as they experiment a bit more here with different types of instruments and sounds, even quite much electronic infusions can be heard here and there, it all could have become a mess but the two members Gruäbähung & Grüsu balance all with good taste. On paper this is something not many bands would feel competent enough to take on as a project...

...Also some parts sounds like a sound track to The Rococo Art Movement That Dominated The Seventeenth & Eighteenth Century but in a very dark way.

Track 4 & 5 is for me i think  the best tracks but really all songs has good dynamics and interesting sounds to make this album "Dr Ahfang vor Misäärä" a total immersive experience....only thing i would like is to have english translated lyrics only to get that 100% kick....as the album title...does it mean: Dr Assfan of Misery? hehe

One thing i wonder though is how they recorded all this music as early as the early nineteenth century? Will probably never be solved but i am glad they found this old treasure.