I been a fan of IM since the second demo "Perditricem Sui Possessionem" from 2015 and have almost all of the previous eleven releases at this point, all has more or less same good standard/style/atmosphere so if you like one release you will most likely like the next one you find.

As this is a pretty obscure Mexican one-man band(Besharth is the creator) i am happy to see it getting released & spread outside its home country on labels like Hatework Propaganda (Germany) and Perverse Homage (USA), well deserved i think. (also if you fins the latest RAW WAR-zine i did an interview with the man there as well) 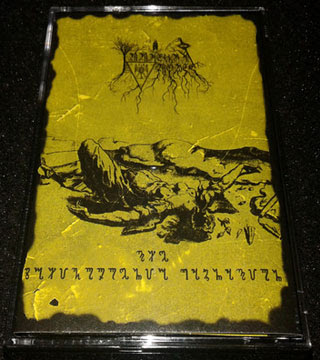 This new album "The Schizophrenic Damnation" continues on its threaded path of dwelving into the creators mental state and battling the Schizo demons from both an occult viewpoint and a personal one both in a destructive AND a constructive way...at least thats how i feel about it.

It is a frantic and melancholic journey and feels heavy on one's shoulders but it feels also that it goes forward even if its minimal in steps (psychologically speaking), it is dissonant and it is dipped in a hysteria one easily can imagine one feels from having these spiritual weights all life, how will this end? How can a person get a stabel structure on a spiritual highway crossing storming inside?

Beats me but the musical consecration IM presents add something to me personally and dont retract so that would count as a good result i feel.

If you new to this band and feel like giving it a try prepare for a twisted and raw black metal with a flair for morbid melodies that slowly drown you in a void.

Last song here is my top track pick, it hits that sweat spot with a solid balance of what i enjoy from IM, it encapsules all pain from Besharth and combines it with ash bleak compositions that elevates the whole  into a grand ending.