And down fell a burnt wing from an angel....then came a massive rain of blood and bodies.... the golden throne was empty.

From Narbentage Produktionen comes this split with Swine Soul which is a one man band from USA and  Ruins of Unlight (4 members) from Germany / Austria. 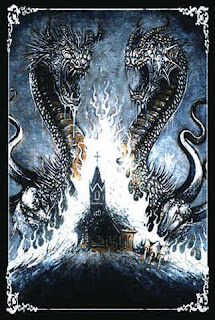 Swine Souls music emanates from a noise perspective but incorporates enough black metal parts to make it appeal to me, i for sure have nothing against bands to mix in all kind of electromagnetic darkness into black metal...it can have a powerful effect.
It sounds like a thick smog of dismay and pain. It is parts like a "wall of noise" but guitars shine through just enough to make you sit up and take notice....SS´s music has a quite wide range of ways to make his point...many layers of insanity molds into a dirty road that takes you to...............your destination.
It has a more surreal dream like state rather then "songs" so it is an acquired taste. It was effective and gave me new internal visions...and that never hurts when i am about to paint or create something.
Parts of it retains some of the ancient BM world sound but much of it also has an urban nightmare  vibe over it...

Both bands throws in a collaboration track in the midst of this split and it sounds great! It leans more towards pure black metal but i think the best of this song is its raw demonic energy. Could work as a new side project perhaps?


Ruins of Unlight brings forth a more traditional melancholic raw mid-tempo satanic metal, the mix is also quite heavy and choked and disted which work great as a backbone to the compositions, the raspy vocals are great and has some nice variations and it flows nicely together with the guitars, drums are drowned almost but the puls rytm from them  come through and fulfill its reason of existence.
For me this is the best side but i think both are strong in their own ways.

Winds from the ancient war blows over your soul, grand and strong it wander forward, through fire & ice.... song after song recreates this vision of heavy struggling.
I hope someday i will see a full length from Ruins of Unlight on vinyl.( the Burzum cover was nice also) 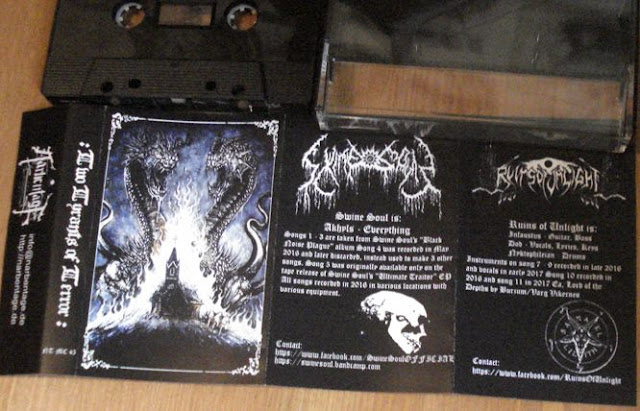 This split clocks in slightly over one whole hour so you get much pain and strife for your cash that is for sure!!

A good if a bit genre mixed split tape. (i am happy to have my artwork as the cover for this too hehe)