Last year this first EP from Huoripukki (means whoremonger in Finnish) got out from the dusty chambers, previously they had released a string of (four) demos between 2008 and 2010 but non i have heard though so this tape is the first assult i hear from them....first reason really i got interested in them was their messy but charmingly cool band logo hehe....

They play in a dusty quite slow barbaric death metal but with some inspirations from other generes like Thrash and heavy metal i think but these are morphed into the whole very nicely.
They sound pretty much as the cover looks like (the artwork reminds me of the art from the artist Warhead...) blunt and unforgiving. Guitars chuggs along the thumping drums but it also lash out a solo here and there for good measure.Vocals is dry and foggy and encapsules the atmosphere with dread and strengths. 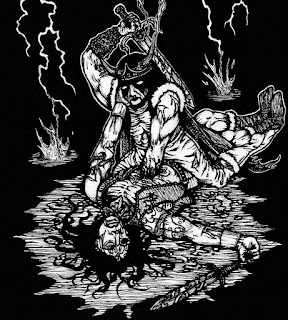 From start to finish you get a heavy and meaty experience...sounds like a good old medieval Rape, pillage and plunder sound track!

I like the bands overall sound as it both stands on its own with its barbaric battlefield beats and embraces its traditional primitive death metal roots.... they have already this year released a new demo called Nekala Dungeons '17 but what i really look forward to is a full album from them where they could bump up the barbaric feel and dramatize it even more because there is much potential here to explore deeper. 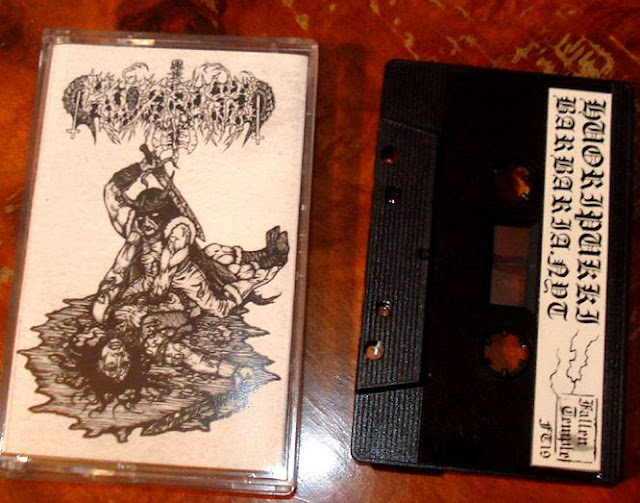 Also a exclusive interview with the band will be published in my next printed RAW WAR issue. (due to be out early next year)