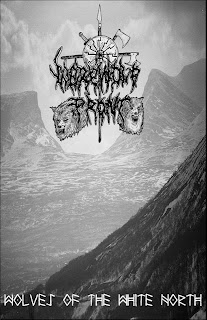 1. Thanks for take time for this interview!

First i must say congrats for the release of your debut demo "Wolves of the White North"!
How has the reception been? Sorry if i flatter you but I must say i liked it much myself.

A: The reception has been quite good so far from my understanding.

O: You don´t have to excuse yourself; it is a pretty generic black metal album.

2. One thing one often wonders when i new band pops up and especially in this kind of bloodthirsty good fashion like this is who is behind this massacre and how & when did this had its start?

A: Our names or who exactly are behind Werewolf Front is something that will remain undisclosed in order to put a larger focus on the music as well as the lyrical content.

3. In regards of the demo how did the creative process go? Did it take some time constructing it or did it whent from clarity to clarity? And can you describe its lyrical content?

A: Lyrically, we are influenced by the current state of society, the loss of identity and the complete deconstruction of the Western world. The first lyrical ideas were first influenced by the writings of Karl Maria Wiligut as far as metaphors and symbolisms go, but later on, the writings of authors/thinkers such as John Järvenpää, Frithjof Schoun, Guillaume Faye, Oswald Spengler etc. has been of influence as of late.

O: Since I didn´t write any of the lyrics for the demo, I can only explain the musical construction. It began with the idea of recording a cover of a Satanic Warmaster song. After that I recorded some riffs in the same style and it resulted in some more tracks. All written in the span of four days. So, at the same time I wrote the guitars “A” wrote the drums, lyrics and recorded the vocals.

4. In the quest of ones ancestral heritage how complete do you feel your search have been?
Maybe it is a life long study but i get feeling you are at a stable point of knowledge.

A: I don’t think that it’s about ”searching” per say, but considering that most people are more or less sleepwalking through life some methods in order to ”rekindle the voice of the blood” to allow an archaic renaissance to take place, is in order. You can read how many books you like concerning things that touch upon your heritage, history etc., but that does not necessarily mean that you will ”wake up” from egalitarianism, rootlessness and consumerism.
You will reach a point in life when you will have to either take action one way or another or bury yourself in unnecessary guilt and self-loathing. I’ve always been aware of my culture, history and tradition since it surges from my entire being as I am an extension of my ancestry, something that many people seem not (dare) to care about due to the fear of being socially exiled.

O: I don´t know where to begin on this question. Because I don´t know what answer you seek. I can´t say that I´m on a quest for my Ancestral Heritage, I could say that I´m rather a biological product of my ancestors. I don´t know how complete my search can be since I don’t know what it means to complete the search and what the completion of the search itself is.
What I know is that I search for some kind of “completion” but whether I should call this my Ancestral Heritage I do not know. I would rather call it something else.

5. So is it correct to say that this first release happened a little out "accident"? Except of doing the SW cover did you have plans in starting this band anyway?
Either way i hope you have thoughts of continue and produce more Werewolf Front music.

A&O: To put it simple, yes, you could say that. However, although our first release was recorded under such a short time, I am still quite pleased with the outcome.
We have started writing on new material and whilst it is somewhat similar to the first release, we have decided to elaborate both the music and the lyrics so it gives off a more focused impression.

6. I guess that one or both of you have some prior experience in some bands besides this, is there some you like to mention?

A: I have played (and still play these days) in a number of bands throughout the years, but they are of no real importance. It’s been many years since I last performed live and it’s nothing that I really miss in all honesty.

7. Besides the great Satanic Warmaster what other bands do you respect and enjoy?

A: There are quite a couple, but to be perfectly honest, I do not listen to black metal that much these days. As of late I’ve been listening to martial industrial/neofolk bands such as Art Abscons, Atomtrakt, Leidungr, Solstorm and Triarii, just to mention a few.

O: I pretty much enjoy everything from choral music, such as Giovanni Pierluigi da Palestrina, to modern electronic music like Venetian Snares. But for metal I don´t have that many bands that I really respect and enjoy. There are however some really good bands which I listen to now and then. Skepticism and Portal (AUS) for example.

8. Is there some merchandise coming out from you in the close future maybe?

A: If you by merchandise mean t-shirts, patches etc, then no.
Sword Productions and Blood and soil productions did however re-release our debut ”Wolves of the white north” not that long ago. 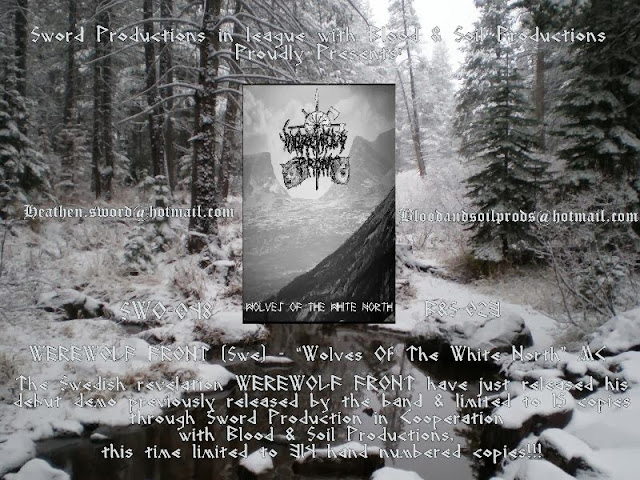 9. Is there some bands out there that you would like to do a split with?

A&O: We have been discussing the possibility of putting out a split with some other band, but we have no specific “dream band” that we would like to collaborate with.

10. Thanks for your time and good luck with all of your endeavours.