Bloodlust - At the Devil's Left Hand

The second album is on the horizon (release in the end of August) from this Australian Blackened Thrash metal band, first album "Cultus Diaboli" fro 2015 was great and was my eye opener for the band. So when i got the news that a new full album was on its way i naturally got exicited. 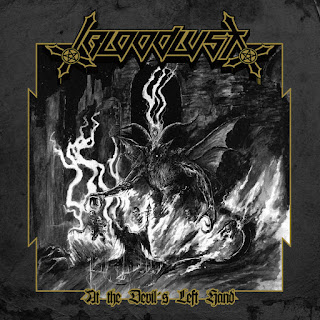 So here we have been given a teaser track which is also the title track, it sounds as great as one could hope for.How it sounds? Like hungry demons riding the brimstone horses down the graveyard path! A pleasure in hell for sure!
Some new musical and vocal ideas is heard in this song besides the solid but classical style... i for one will pick this up anyways when its released from the burning crypt!
A fast devilry attack!

And also i hope for a vinyl (cd and tape for now) in the future as i dig the cool cover artwork by  César Valladares....i want it biiig! hehe

oh by the way if you did not read last years interview i did with them here is the link to it: