Blessmon is from Austria and has been active for a good 18 years now and this is their third full length album.

For me this is probably the first time i hearing this band though...perhaps i have heard some from the first album from 2007 but if i did it did not make a strong impression....

Blessmon play in a cold and sombre mid-peace to fast 2nd wave black metal, no extra bells and whistles just straight evil darkness. Drums fly off with some blastings mixed with calmer patters, vocals is a bit obnoxious in the mix but works fine with its croaky declarations of war. The guitar is where the real gold is at! Almost all songs (first 6 is the strongest i think) have a bunch of strong and sweaping compositions that enhance the overall feel greatly!
They have both an nostalgic bleak atmosphere and a oppressive nihilistic vibe. Top stuff!

Perhaps the only negative thing here is that it has no big personality to it as a whole, a bit like the cover art and logo looks like so you cant say you´d get fooled hehe.
Either way it has a bunch of strong material in it and i have no problems recommending it as long as you take it for what it is, a solid but traditional black metal played with a straight face. (with some splendid guitar parts!) 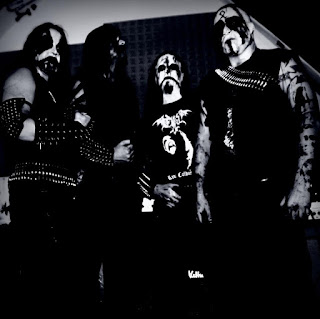 Besides the music this album seems like it is a kind of a WW1 concept album...i am no expert on that war but much indicates that this is the case which is a nice extra touch.