As the final tone has ended i feel a sense of sombre calm....and also a nice balance in this Eps overall feel, it has the introspective and slightly experimental compositions that the first release had combined with the second ones more straight barbaric black metal chugging....
....yeah i feel this release perhaps shows OMs top moment on what they are in this moment.
(i bet their sound will transform as time linger though)
, the one thing that has added on to their creation (as i hear it) is a sligthly harsher production and for me that only works in their favor.
Very nice textures. 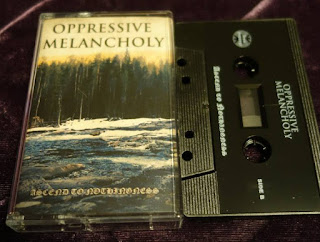 As i said they mix their two first releases sound but they also do it in the best ways so that the dramaturgical journey works extra good. (holds well trough repeated listenings)

The vibe i get from this release is like you reunite two opposite forces or rather try to do so and from that the sudden clashes happens and thoughts comes falling after...a bit like a bleak argument taking place in musical form.