Here we have a new heavy beast split from the icy Finnish shores! 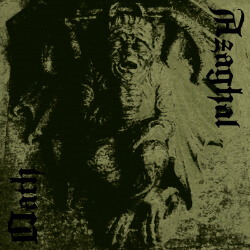 First off i have to say i am far from being an expert on Azaghals vast back catalogue besides from the only album i have my self and that is the smashing "Perkeleen luoma" album from 2004 so i will only base my comparisons from that to this almost 12 year newer material....So what can i say about this new three songs from one of Finlands satanic bulldozers?
Well they are for sure some strong and pretty long compositions as always Azaghal never disappoints but i would say this is not their hottest material, one reason is the production is a bit too warm (compared the the only album i have which is ice cream cone cold and steely eviiil blasphemy bliss!) and the other can i guess can be put on Oaths material that is bleeding extra much here so its hard to see.... the best parts of Azaghals competent songs is the subtle guitar melodies and bends,pics etc that put the "i" in intriguing i think other then that all is delivered good & hard as usual but not really up to old standards. (the same year (2015) as this one they released another split AND another full length...damn!)

Oath as i hinted is the best part of this split plus i have a little more insight on them as well.
They as before make pretty long and doomy transcending music in a very satanic way but here i think they almost out done themselves in vastness and meditativ atmosphere...probably their longest songs to date.
They put you into a dark murky trance that pulls you deep into the impenetrable dark river of Styx... the riff repeating works fine as the riffs is solid and the overall constructions is well thought out, nothing original but traditional doomy devil spells is what they do & do good. (and dont miss the coming new full album from Oath now in May!) 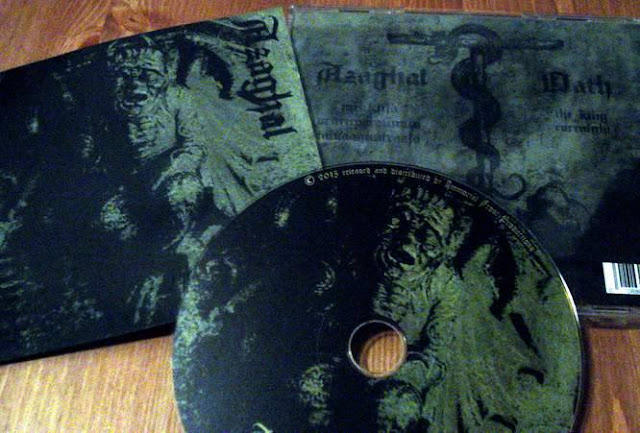 All in all a "well worth getting split" whatever i said or did not say.