Holokauston - Hymns For An Unavailing Tragedy

Ok it is not everyday that i review an BM band from India.....probably happened like twice in the past 5 years.... so i cant say i have a solid image what Indian BM is or sounds like which makes it a bit extra exotic bracing this band. 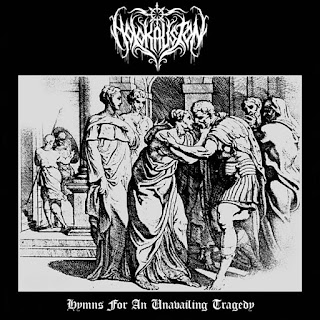 First this is i think the third release from the one man Lord Chaos (does it all) and my first reaction was "Hmmm this is pretty impressing!" also from what i understand this Lord is a young Lord...dont think he hat hit the big 20 yet so that makes this music even better. I was a retard that young and could never see me come up with this type of music.

The music is a semi raw & somber melodic black metal with a mix of traditional second wave Bm and some more long progressive (not Prog!) and quite personal compositions that does not feel ripped from the greats. Songs is between 5 to 10 minutes and during the individual playtimes much interesting atmospheres is building up.... both be a bit meditative and dark like a distant wrath looking down on life. Lyrics seems to be on the more pondering side rather then lashing out in hate.
Feels pretty mature...

Production is as good as it needs to be, all is audiable but organic, cold sharp guitars, dry varid drum patters mixed nicely in the back and some synths is used in a tasteful way, vocals is raspy and works fine. Feels pretty much like something that could be found in the 90´s UG, a bit Swedish, Norwegian and also a bit Greek sounding if one should pin point it some more.

I dont know if its release on physical format but here is the bandcamp page:
https://holokauston.bandcamp.com/album/hymns-for-an-unavailing-tragedy-3