It is time for this great Swedish death metal band to drop their first full album into the thirsty masses so an little interview seemed fitting for this dredded occasion! 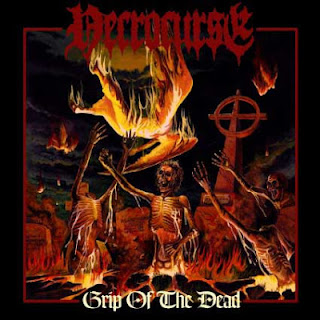 
1.First of all i want to say thanks for taking your time off for
this interview, i guess it must be quite a hectic time right
now in the Necrocurse camp? Any nervous breakdowns or violent
outbursts?


- It's ok, speed to the grave! Right now it's mostly answering interviews and to plan for upcoming gigs, at the moment mainly for release gig for "Grip Of The Dead".
We are actually writing and rehearsing new material as well.

2.Talking about psychological conditions, is there any
posttraumatic stress now when your work is all done on
your first full album?
I myself use to have some "birth depressions"
after the relief is gone when some big artistic work is
finished....


- No, no stress symptoms. We are moving forward with new plans instead. All members are driven, creative and dedicated so it happens a lot.

3.Do you have any favorite songs from "Grip of death"?
If so which ones?

- Several songs I actually had time to tire a bit on. Especially the ones we started rehearsing in early 2011. But personally I like "The Devil Cobra" and "Ripping Darkness" (for now). Of course, I like all the songs! But sometimes you get tired of some of them.


4.Is there any plans in doing a musicvideo on any of the
new tracks? Or maby a nice official live-DVD sometime?


- We have not talked about any live DVD. But we have however been talking about making a video. We've certainly talked about since 2011 but we have not come to the shot. We have a contact who is interested in filming with us. But we will only get to the planning of the layout. Do not think we have time for this before the summer. Possibly this fall.


5.On the songs Hellbutcher contributed lyrics to did he get
total satanic freedom in writing them?

- Of course, he is free to write what he wants. He has mostly come with smaller inputs for some of the lyrics and some have I and he written together.


6.Is your preshow dress-up/make-up procedures something that
takes up much of your time and energy?
I guess that it takes a bit quicker compared to Nifelheims two hour "ritual"?

- It does not take so long. Someone might take on a little extra for the stage. Probably all of us look more or less "normal" like off stage.


7.I have seen some lovely merchandise posted on your facebook
wall like keychains, bear decals, nice white coffee mugs with the logo on
etc. Is this neatstuff made in very limited numbers or do
you make new ones after the demand?
Is there any more stuff that  you are working on (merchs)?

- Most of it is very limited. We are, as I said driven to create things around NECROCURSE so there will certainly be more things in the future. The closest that soon is going on is new tshirts "Grip Of The Dead".


8.How has the international reception been for Necrocurse
under its growning existence? I mean the nordic scene is almost
a given that this stuff will work out well. Any specific country that your music has
been extra well greeted?

- Have not had time to read all reviews yet, but what I've seen so far, it's good. And it's damn good and an honor if people like what we do.
We hope of course that NECROCURSE have something a little unique in our material, even if it is not completely innovative and 100% original.
I mean, it's Death Metal. Have no larger track which countries like us more or less right now.

9.Do you feel you have achived in what you were intended to
do with this album?
Is this the ultimate Necrocurse experience?

- The end result was clearly at least as good as we had hoped. Given the conditions and the recording process, we are damn happy. Then next album will surely be better of course hahaha.

10. About Hellbutchers talent in painting has he any
artschools on his CV or is he just a self taught djävel?

- It’s not Hellbutcher who painted the cover but he has done all layout and drawing some stuff here and there. He is clearly talented. Can not imagine he had any art school.


11.What can we expect from your liveshows under this
bleak year of 2013?
From what i have seen they look to get more and more dramatic
dramatised (lights & such) which suits your horroragenda
really good!

- We only have two gigs booked now in april. Then we'll see happens. Hopefully it will be a few gigs over the summer and then more gigs in the autumn. We will run on as we have done before on stage. Play hard, fast and violent.


12. Any final words/warnings from Necrocurse for the unprepared
ghouls out there on this rotting planet?

- Many thanks for the interview! Prepare yourselves to be crushed in the grip of the dead!