From Finland with hate!

1. HAILS! As you are a fairly new horde how has the response been for your intolerant and hatefull (& powerfull if you ask me) creations?
And what was the main intent for starting this band & what does its name stand for?

- Response so far has been good, we are slowly but surely crawling our way into the eyes and ears of the witnesses present. Sielunvihollinen was created to channel our devotion to the dark lord, the infinite mysticism and beauty of the surrounding nature, the dark side of the deadly path that is life and our hateful attitude towards the dirty swine of Islamic faith. It was intended to respect our roots, to follow tradition, yet walk our own path instead of simply retracing others steps.
The name stands for "soul nemesis" and it is a name that has been used of our master by his enemies. We harness it to manifest the hateful adversary we represent.

2. Your first 5-track demo "Musta Uni" that got out in 2012 is a brutal and firm debut, can you describe its lyrical content? And what kind of bands and musical genres has influenced Sielunvihollinen sound? 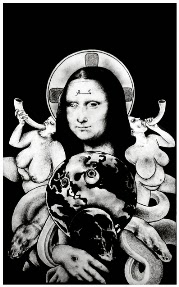 - As we mentioned before, the sound of Sielunvihollinen draws influence directly from the greats of finnish black metal while adding own characteristics to it. The lyrical content is as mentioned on the previous question.

3. And this year your second (also) 5-track demo "Ruttokieli" was released,is this a direct continuation from Musta Uni in terms of themes and audial hell? 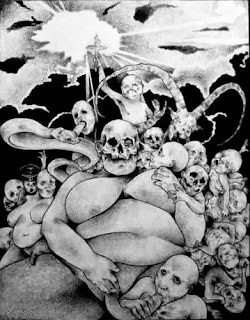 - As for the music, I think it's much more mature than Musta Uni. It has it's own sound and it stands on it's own feet without having to be compared to other artists. The lyrical content deals more or less with the same subjects as the first demo and we intend to stay on that blackened path.

4. was this second demo a self-release? As i understand the first demo was released through Spread Evil Distribution?

5. I see you used the master of macabre artist Maxime Taccardi for both covers, was these covers made specific for you and was he under some guidelines from you?

-We wanted the art to represent our message and our sound and Mr. Taccardi perfectly captured those with the artwork he provided us with.

6. Congrats for the demo compilation that Darker then Black will now construct and release! How did this come about and will this be a direct conversion to the cd or is some material remastered? (not that its needed though) And will Maxime stand for the artwork once again? And is there a release date ?

- Thank you. The compilation will be released by the end of this year.
Our co-operation with DTB rex somehow evolved through mutual contacts and Mr. Möbus openly expressing his liking of the first demo. By the time the second demo came out we agreed to do the compilation when the time is right. We are truly honored to have the privilege to have our music released under his label.
Taccardi did the artwork for the compilation as well.

7. Besides from this demos is there a "proper" Ep or album in the works? Or maby a split with some respectfull entity?

- We have talked about a possible split with a like-minded Finnish BM band, but that's not written in stone. We have been writing more music so eventually we will decide to release a full-length album, but currently we are in no hurry to do so.
But as usual, our releases tend to shape up in short time periods so you never really know when its time to kill again.

8.Do you plan on playing live with Sielunvihollinen? If so is there any gigs booked?

- Most likely not. We would prefer to stay off stage. But never say never, I guess.

9. Thanks for your time.