1.Hailz! Welcome to the non-physical plane of RAW WAR! Malepeste started its course back in 2010 (if my source is correct) which means this year is the fifth active year of its existence,how is the band now compared to the start?

-Hails, and thanks for your support !
This is interesting to look in the past, to see the path we went through. When you listen our first demo “Malepeste” you can hear something more raw, more depressive in vocals. Our first full length is more close to our work now. Something with a lot of arpeggi, some groovy parts and dissonances. You can easily listen the difference between our sound too, we always recorded by ourself, and after years we get more experience and material.
And this is the same for ceremonies, we get more stuff, it’s getting more visual.
This is important to us to make a concert as a ceremony and not just a concert.

2.How was the time when you recorded the first demo and do you still like what you composed? 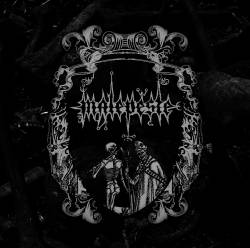 - It depends, I still like some tracks of our first demo but I think they need to be revisited, maybe one day, why not. We did it quickly and we get good returns from people and webzine so finally it was good.
But now this is not what Malepeste is doing anymore, well or sort of, but better now.

3.The first full length "Dereliction" got out in 2013, as the title means something along the lines of "act of abandoning" one wonders if its life thats getting the ditch or how was the idea behind the title? And was it only a self release? 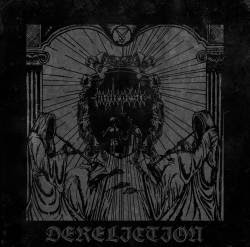 - First of all yes, it was completely self-released, from the recording to the pressing. And about the title “dereliction”: it's more about exploring this feeling of loneliness as a whole, and developing all what we can find throughout the album, than the “I want to die” sort of crap. Primarily theological, this word expresses the feeling of the Christ on his cross, we found within it an interesting reinterpretation in a darker way. It’s also a strong and unknown word that deserves to be brought out that’s why it’s a good title for this album

4.How would you describe your occult path and interest? I get a bit anti-cosmic vibe here and/or some necromancy luring in shadows.

- This is something personal for each band members. We don’t support any kind of institution or philosophy, each member find what he needs to find in occultism and ceremony. The interest of each one depends of a lot of things, but finally we all agreed on something: we are looking for a personal elevation and transcendental paths in ritual music.
We operate with pictures. Our lyrics and our music is made for images, full of metaphors etc… We want our followers to travel in their mind during and accompany us in an images world, without limits. Everything our music made them feels and see is interesting to know. Music is a question of feelings and pictures.

5.Then in last year you released the split "Mysterium Coniunctionis", How did you come in contact with Krowos (Italy) and what can you say about the content of your tracks? How is your general view on splits? 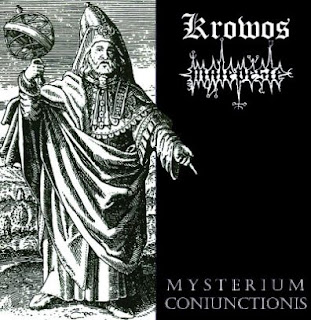 - At first I made a trade with Frozen, the Krowos drummer with the cd of his other band: Arcanum Inferi. And he proposed to do this split. I just said ok and there it is.
Each bands composed three tracks for this split, and we made a common intro with Frozen, this is stuff you can only found on this split.
Splits are a good way to discover bands, you buy it for a band, and by the way you listen another and it could be a good thing. Or not. But this an important thing in underground, and the kind of split I really like is when a special theme is studied by the two bands for a split.

6.And now this your sophomore album is at hand! Its title is "Deliquescent Exaltation"... as the cover art paints a picture of man rising/levitating towards or by the horned god (or is it the opposite?) it feels but at the same time when i checked the meaning of the word Deliquescent (Becoming liquid, or having a tendency to become liquid.) it got a bit blurry hehe.. please tell about the vision and thoughts behind the album title and art. Other then that this album (so far) feels like a big but natural step for the band. 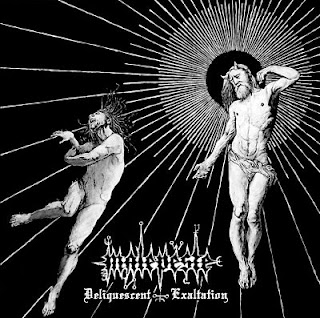 - For this album we worked on a concept, the tracks and lyrics studied the concept of falls and elevations. This is just the natural path for spiritual elevation, you have to go through different step of falling, before recovered yourself and reach the spiritual exaltation.
The name of the album express perfectly this concept. Deliquescent Exaltation is a kind of oxymoron who express the lowest body state, but necessary to go reach the great elevation. That’s what the word Exaltation means, the perfect state of spiritual well being.

For example the track “Going Under” speaks about this necessary path. It speaks about the Sokushinbutsu monks, some Japanese Buddhists priests who tried to self-mummify themselves. Taking a very special diet during years to finaly buried themselves alive on a special cave in lotus position with just a little tube to breath and a bell to say if they are still alive or not.

When this ring shuts up, the cave is closed and after one year they opened again the cave and if the monk is mummified he becomes Bodhisattva, he gets the perfect illumination and is revered as Buddha himself. If he failed, he is just respected for his perseverance.
This example express very well the concept of the album.

7.Is there some other bands that you respect in Lyon? And how would you describe it as a city? Pretty large city i think.

- Lyon is a great city to live. Not as big and touristic as Paris, bug big enough to see some interesting bands and great places.
A lot of great bands are from Lyon, like Crystalium, Orthanc, Nehëmah, Ad Hominem etc…
And still today, we have bands like Dux, Udyr, Daughters of Sophia, Evil Eruption, Neige Morte, Celeste etc…
I respect all authentic bands, people who really are into the music they made, not just for their personal image. Music and especially black metal is a need, not a desire.

8.If one likes to gets some merch from the band what can one look out for?

- We have some shirts, patches and pins, but the principal is our albums, available from us and some labels.

- After this album we are working on a very special ritual, only with friends under invitation. A way for us to express this darkest part of our art with great people who can understand and appreciate it. We wanted to do it long time ago but we missed time, know this is getting concrete.

We are working in a special split too with two other great bands from Lyon: Udyr and Daughters of Sophia.
Gigs are extremely important for us, these are our rituals and each one of us lives it in a personal way. This is the only way to feel the dark energies, and people help us to the stage exaltation by sharing with us this special moment. One of our best moments was during the last tour with Hetroertzen and Malhkebre, we performed in a very special place. This was a private ritual with something like 30 people only in an old troglodyte cave. It was extremely intense and strong!
The worst thing happened during a show in Grenoble, because of our candles and the fog machine, an alarm rang, the lights turned on and the sound stopped. It was a terrible experience, we were really in, starting to leave our conscious and this brutal return to reality was absolutely painful.

10.Thanks for your time answering this! Last word is yours!

-Thanks a lot to everybody for the support and go to see live rituals.
This the way bands really exist! 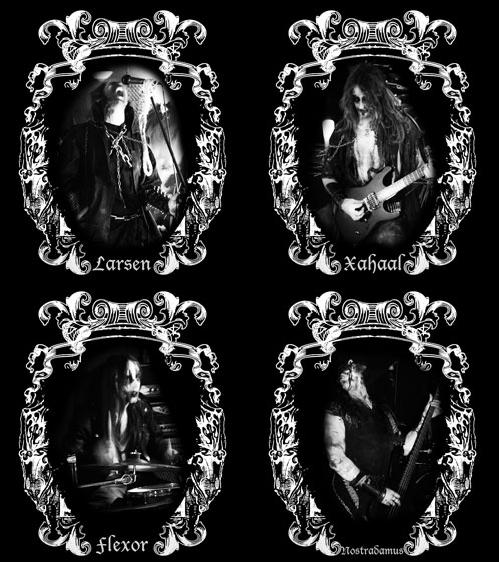