Khaospath - ...for the Devil Speaks the Truth


Here we have the second album from the three-member horde Khaospath which is two parts Swedish (Döden on Bass & Gheist on Drums) and one from Malta ( Hellcommander Vargblod is on Vocals, Guitars, Keyboards  and his other projects is/are Draugûl, ex-Martyrium) 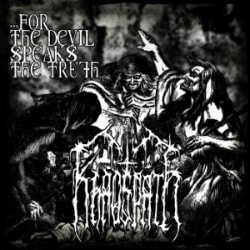 First time for me hearing this band so i cant compare it to the first album but i dont think it matters as this album feels like a concept album and works fine alone.

First i want to say is that this release has many great things going for it, it has a interesting and dynamic mixture of first wave black metal (mostly in the vocals i think) and second wave BM (quite Swedish sounding) and also much 80´s satanic heavy metal! Yeah i know there has been a annoying trend for some years with bands to suddenly include a very 70´s-80´s heavy metal (and heavy metal ballads) styles in black metal and most of them just comes out looking stupid and hipster"ish"... i puke demon diarrhea on them! BUT i dont hate that out of some principle but out of that weak trend following behavior, that said this band does it pretty good and i dont feel like puking on them haha!

Second track and forth show the bands strengths the best with a very catchy but foul dramaturgy, strong guitar riffs and melodies and overall splendid compositions. As i said earlier that this is a concept album reasons that i drew that conclusion is that all the lyrics more or less paint one big story, a story of greed that leads to making deals with the devil (or demonic forces as in devil´s whores) with blood sacrifice( and i guess soul selling) in exchange for power (humans are so feeble minded and simple), this concept is as old as humans i guess but it will also be relevant one as long humans exist, it is well written and be sure to read them as you listen to it for the maximal enjoyment.

Besides all this great things there are some minor sour thumbs sticking out and that is a couple of instances where the band bursts out in some pagan clear vocals that sounds just silly to me...and the last song could almost fit as some mid-act in the Eurovision song contest...yeah just skip the last song.
And as a big creation this is (feels like it took quite much work and efforts to do it) with all the dramatic storytelling (almost like a black metal musical) i think it deserves a better package design with artworks etc just to get a more complete feeling to it. If it was me i would done it in a A5 booklet style with matte paper and original drawn art. 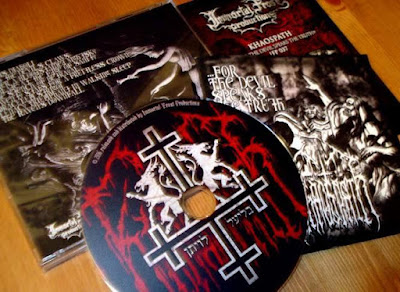 All in all a worthy purchase as it is quite different and brings much to the table which i am sure many would enjoy. It also holds up very well with multiple spins also.