Time to step unto the battle fields of world war one, yes it is a concept album and it works just fine, to set the atmosphere right they put in some time related snippets of samples between songs but music comes in first hand. 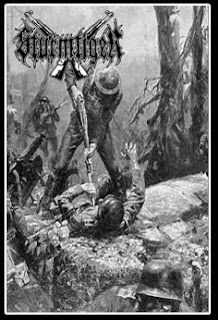 If you are not familiar with Sturmtiger they are a 3-member band from Denmark (but now resides in England) and they play a kind of war metal with inspirations from the battle giants like Blasphemy and similar but not so much that one can think as they have a more rolling Thrash(ish) drive with a big scope of drooling blackened death. It has a entertaining and groovy sound without being death n roll.

Crunchy stabbing riffs and manic (good recorded) drums blowing the enemy trenches with easy, semi dark raspy vocals do a fine job marching on with the rumbling bass having his back. Great war hell is painted in your mind!
Good production and delivery, old school for sure but that will never die!
Sturmtiger do it right!

A solid slaughter that also grows after some spins.

This i listened to is the War Productions tape re release which has on the B-side "Live at Nambucca 24-05-2015" as a bonus.
The original cd release was 2014 by Black Plague Records 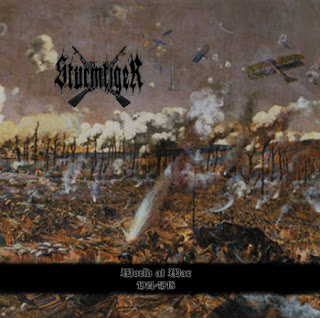 I think the cd had some other track also but i dont remember now, perhaps it was just some cover.