I have in recent time (1-2 years) been getting more and more interested in this band so getting the latest Megalith Grave release is always a great moment for me. 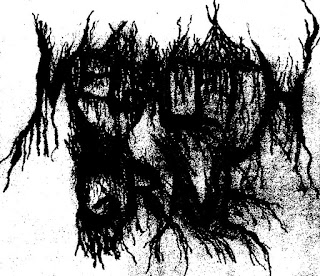 If you have not heard MG he (Gamol) plays a very raw and obscure black metal, but as he has been active in around 6 years now he have evolved his sound i think and he has a quite nice spectrum of diversity (inside this genre) in what he releases, besides the BM he throws in some good dark ambient from time to time. Tasty vile art for the underground rats ! 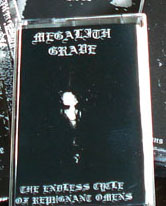 So the tape here in question is a two-track tape (Ominous Sickness & Decomposing Tranquility) and even if that seems short the songs are not too short in of themselves, for me these songs are some of my favorite tracks i heard also from MG. The buzzing melancholic guitar parts takes you quite slowly over the damp grounds of the scared landscape of a mind, the vocals here is very shrieking and emotional and it almost sounds like Gamol is sinking down into a deep cold stone well. Desperate feelings enshourds the air. Second track continues with similar bleak compositions and completes this tape just nicely....and one thing i love is that the tape length is fittind for the songs length...not slapping two songs on a 90 tape etc. 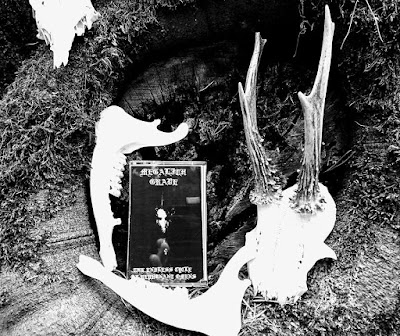 Another reason this tape was made is to make these two songs justice, they was released before on the split with Angelcide... here is a statement from Gamol himself about this matter:

" I made the mistake of actually cutting them to make it fit the 7" and rushing the mix to get the work out on time. I hated the outcome and regretted doing this ever since. This release was created to justify those tracks to actually show the listener of their true form."