Diabolical Principles - The Final Step Before the Dawn

Here we have the third full album from the Greece based demons!

Even though this band has released one demo, one Ep, one compilation and one split (besides the albums) this is my first time i come across them for a good listen so i cant really compare their former works.

I have seen that some past albums have gotten mixed reviews and so but that is all i know but in relation to that i think that this album can be one of their better ones.... 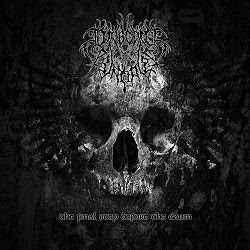 DP revels  much in mid-tempo architecture but with some stand out parts that whip up the heat a bit, i would metaphorical speaking say that these dark and pretty long songs feels more like an veteran warrior with leather skin pushing its enemies slowly backwards rather then attacking with a full blown fire like some young one would do, either way is wrong, it is more a matter of taste or moment one listens to them to really taste their full flavor....which is a mix of 90´s epic Hellenic blood and some bitter 00´s BM.

First track is one of the better ones with a quite threatening guitar riff thats looping forward while the heads are rolling. The quite long playtimes are pretty well filled with enough variations without changing their evil lumberjack style. hehe

Vocals is harsh and dont really have much variation in it but it fits the mould well, some minor subtle use of keyboards is to be found but nothing that is out of bounds for this grand & suppressing aura.
The cold "Celestial Sleep" is one more of the better ones and "The Eye of Forever" and the last part of the last song is a favorite with its strong and epic guitar melody that fades away into the darkness of the past and
rounding off this album greatly.