1.Hails!
Great to have you here!
From what i understand Dødsskuggen is a new band and you are the sole inventor and ruler of it?

- Hail, great!
Yes, this is, I play the guitars, bass, keys, vocals and programming the drums.

2.Can you tell a bit about the way towards the start of the band
...and what drove you on?

- I always have been into the music, and of course the Black Metal, playing in some bands, and last year I decided that was the time to start my own project, on my own ideas and feelings.

3.How is the city you grown up in general & regarding black metal?
Is it some bands also one should know about in your region?

- Well, not so much to say, small place, far from everything... no pubs, no more bands, maybe two or three, but I can't remember now.

4.What can you say about the first demo released last year "Dauden"?
I liked it and its pretty dense negative atmosphere. For me the three songs feels like a 3-step drama, first exploring the unknown then confronting death itself then at last linger in limbo wondering if one is dead or not. What where your goals doing it?

- I think it is a good material, Black Metal in the line of 90' maybe?! I don't know, is hard to talk about my own music, Black Metal with dark passages, negative atmosphere as you said, angry vocals. I really think you describe it very well and don't let my words explain by myself hehehe. 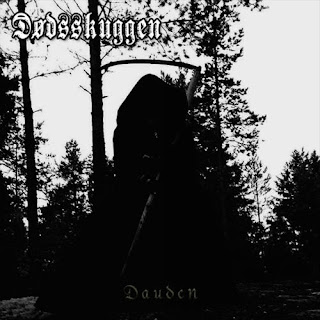 5.Did you do some physical copies of the demo or is it only digital?
-no

6.Have you been in contact with some label for future Dødsskuggen releases? If so which?

-Not, I have talked with some labels, some of them are not interested and some of them I don't like the deal they offer for it.

7.Regarding the next creation what can you say about the music?
Will it be a "un"natural continuation from the demo themes or?

- I have started work in the new songs and sounds like "Dauden", in the line of "Det ukjende" and "Er eg daud?", I don't think will be more songs so fast and aggressive as "Djevelen er her", but we never know how will it be before it's done.

8.Planning on making Some merchs?

9.As i am a damned Swede i wonder if you have some band from my country you like? hehe

- Yeah, of course I do, Lord Belial, Ophthalamia, Ancient Wisdom and more...

10.Thanks for your answers, and best of luck!

-Thank you too so much!!
Hail!