Yeah VarulVs new album is here to howl up your lycanthropic adrenaline! 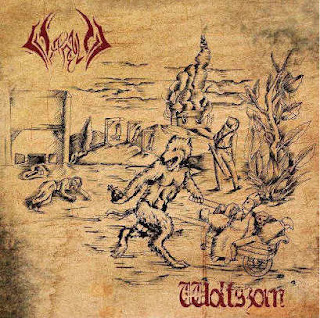 So after saying that it would not come as a surprise that they hammer on here in a quite hectic tempo, but besides its full on attack they throw in enough of stuff in the songs to put your teeth into, yeah sure it is traditional and nothing new (not intended to be either) but they do it with a good dose of tightness and experience...yeah it shows these three members is no beginners because they know the trade and know how to put together a song with just enough of sticks & stones to make you grin & crush your bones....all the way to the end.


The main characters here is the manic steel-claw-guitars and the high shrieking-beast-vocals as they dominate the sound and energy but the drums plays a great backbone as well as the bass do (especially in track 5) The overall production is clean and work well with the musics intentions even if i personally like it a bit more gritty. It has power either way and i think they have a more Austrian/German atmosphere this time around also...cant really put my finger on it though.

As energetic the album starts out i thing the best songs comes towards the end starting with song 4 with its hurricane riffs & howls and then to the a bit slower but has many great compositions song 5, track 6 has a nice upbeat drumming and a nice moody guitar flow and build ups nicely to the last one which is again a bit slower and also has a nice Nordic epic vibe to it all.

As i said in their interview i did with them earlier (just look some month back i think) that they seem to work great on stage with their music and this record only cemented that feeling for me, if they come here to Stockholm, Sweden i will go and see them. An album which dealing a straight black metal punch with both a modern sound and old school feeling, a plus for the nice production design and artwork.