I dont have a big in depth knowledge about the death/black extreme metal scene in India little less Kolkata...the only band that comes to my mind is Tetragrammacide... so i did not really know what to expect from Infernal Diatribe... From the nice cover artwork one can assumed that it would be somewhat serious occult direction which can be true in some aspects.(i dont have access to lyrics so) 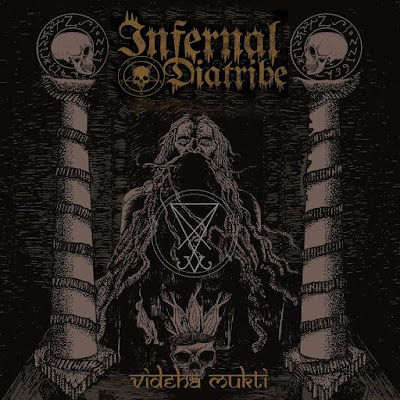 The actual musical sound and construction remind me of some of the old classic aggressive black metal bands like Marduk, Gorgoroth, 1349, Dark Funeral and such and so forth, quite heavy leaning towards speedy blast beats (real drummer?No I guess it is Naztaz is the name of the drum programmer) on drums and cold & melancholic guitar compositions . Classic raspy Bm vocals that works well except for the high pitched squeal cries which sounds just funny...i guess that is not the purpose here to laugh... but that one just surfaces sometimes so no big damage.
Quite long songs also but they work fine from start to finish, both can be violent and a bit hypnotic.

They write in their description that they play Raw Black Metal...nothing really raw here, normal balanced production and i dont think they need real raw sound either so this is just fine.
If i did not know i would believe this band was from Europe which is not bad of course but it would be more exiting with some local mysticism embedded into their sound but besides that they have a competent sound.

The Cry is the best track with a good main guitar composition that brings out sorrow and darkness. Nothing new but quite solid stuff with classic European touch.

Overall this is a focused and nice debut Ep and it is evident that they work on their music so i think they will grow stronger from release to release...depending on how sincere they are with the content...


Out on Transcending Obscurity Distribution