The great cover art drew me into Embrionals nightmare world! 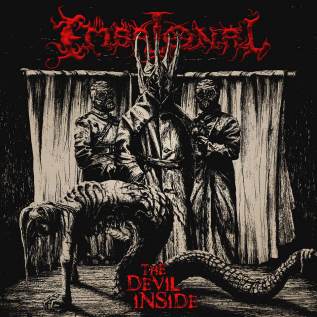 Sure i known this Polish band before and heard a song here and there but i never really
took the time to investigate further partly because this type of more "modern" technical
death metal has never been my main "thing" and partly because i probably had a lazy ear...

Anyways know i have had the opportunity to really listen trough a whole album (their
latest one if you did not already knew that) and i am gladly surprised that it got
its hooks in me deeper then i thought... no pain no gain i guess.

I would say that the ground speed is slightly over medium but their taste of throwing in some
dissonant fits or rhythm breaks it feels more varied then it is, in the middle of the album (around  track 4) there is a tendency of drifting away from "feelings" towards some distant colder machine like riff orgies but around track 8 they come back and each song gets better and better until the last one which is one of my favorite tracks. (including track 2,3)
The last song though is sounding quite different from the rest on this record with a kind of mix of early Metallica & Slayer both in the music and vocal style so maybe its not so representative for Embrionals current sound.

Either way i got some bleeding kicks out of this album with all its twists & turns, they have a nice balance between their ingredients and when they are on top of their game they delivers some serious annihilation in your brain! (And that cant be a bad thing! hehe)

Ah by the way if you not already have read it i did an interview with them here not so long ago, look for it.