1. Hailz! Let start off with the standards!
When did Untergang begin its journey? What bands ignited you
to embark on this satanic musical spell casting?

- Untergang started in early 2014 as a three-piece.
Me and Cranii quickly that the bassist was a poser, so he was kicked immediately.
Back than we were inspired by bands like Mayhem and Bathory, that we still like to to this very day.

2...And do you have some records in your closet you rather would
like to burn up rather then listen to again?

- Oh, we definitely have. One record in particular would be Finnish Steel Storm by Goatmoon. They all around terrible black-metal band, and the vocalist is a ginger. NOT OLD!!!

3. How was it recording the first studio song "Ossa Cranii"?
What do you feel gets lost and/or gets better from the rehearsal to
the studio?

- Ossa Cranii was recorded only months after the band was founded, so it could have been done a thousands times better than the final result was. Only Cranii was present that time, so we ended up using programmed drums.
Anyways.. that songs sucks, and threw it away years ago... 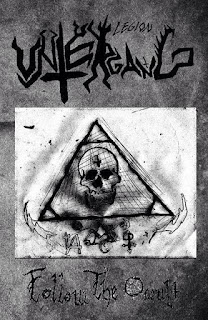 4.So i guess your first release is "Follow the Occult", was it
only tape and from what label? How do you feel about it now? How many
band logos have you used? I like the latest but also have a soft spot for the
red splatter one.

- I don't remember what label it was.. I just remember that 5 copies made "just because".. and it fucking sucked. After the intro it is a 6 minute pause for some reason.. Fuck that tape, man!!
When comes to the logos, i guess we've has like 5. Cranii drew the first ones and they sucked. Than Laura Stolsvard drew the red splatter one that you liked. That also sucked, big-time. Now we have a new un-released logo that is used on the tapes we made.
The girlfriend of Gigim Xul's brainchild "Sentauruz" drew this one, it actually is ok. Fuck logos, dude.

5. One of you are also active in Gigim Xul? How is that constellation
doing right now?

- Gigim Xul is a solo-project, but Mats did indeed record vocals for the upcoming album. That collabaration worked out great, so we have been meaning to form a band, solely for playing live. We wil go under the name of "Todesking" and we will crush. More news on that coming later..

6. You posted the third of October last year that the album was
fully recorded but only waited for mastering...then it took a while
before it was released? What was the reason for the delay?


- Well, we have not released the album, yet. The tapes we made contains to songs from the upcoming EP, and two from our earlier demo "Follow the Occult". These tapes will be sent out to several underground labels, and promoters the coming days. 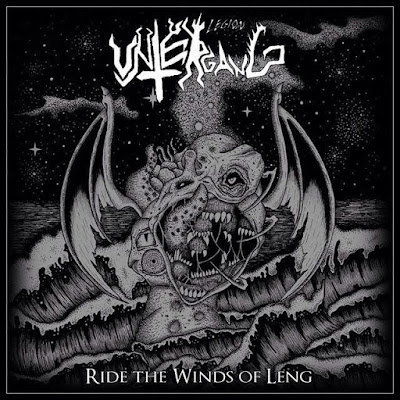 7. Besides that how do you feel the album turned out? Close to your
visions? What is the main focus in the lyrics & What was the hardest
under the time of creation & is it a self release?
Cool morbid cover art also, who did it?

- The album turned out great. It sounds very fucking old-school and evil and it sounds way better than all the bullshit that poses as black metal these days. The lyrics are deeply satanic and lovecraftian. The hardest part was to get enough money, and to actually show up.The recording in it-self went very good.
We did almost every song on the first take. And no! It will not be a self-release as i mentioned earlier. The artwork was made by Manum Diaboli. Very talented lithuanian..maybe the only one?

8. For those who like to get some Untergang merch where to turn?


- We have not bothered with any merch so far.

9. Regarding Black Metal how interesting is the town you live in?

- I don't know. Probably rehearse or some shit.

11. Time to close the coffin now, thanks for your time. 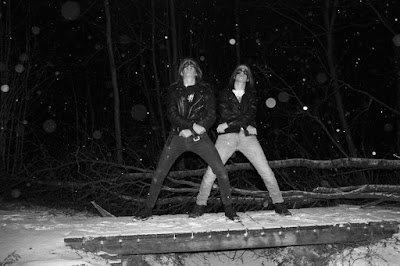