From lifes suffering  if one has any luck one gets some extra understanding of our existence...can that understanding help us? Beats me but i guess we have that desperate itch of knowing so we can in some ways  prepare ourselves for our  inescapable death...yeah humans are pretty useless.

Either way this band from Taiwan Inferno Requiem has been at it since 1999 and has been delivering some  of the lands few raw true black metal, this latest Ep "Moon" is divided in four pretty lengthy songs. 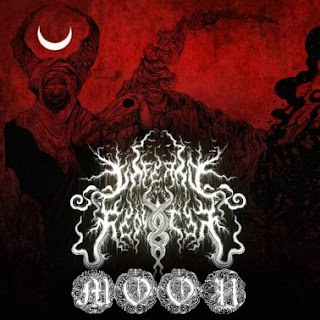 Overall the sound is in a dark moldy soul choked vein that climbs up on your back and weights you down...besides its bleak black metal roots you also hear some doom-esque influences that enhances the drowning feeling greatly...first two tracks is in this delightful heavy torture but then in song 3 the heat is somewhat pumped up with some grand guitar leads and nice building tensions... feels like moving in the shadows of the past.

...then for the final anxious blast beats stream out like some killer bee swarm, keyboards are also used tastefully. The heavy dark atmosphere is still here but this faster track also feels like a one steps out of the casket and into the burning light...a nice dramatic climatic conclusion (sure there is a small outro after it but it is not so important) for this great Ep that has both many good compositions and spades of  bleeding soul.


Very much worth to hunt down! Both traditional but with a firm personal touch. 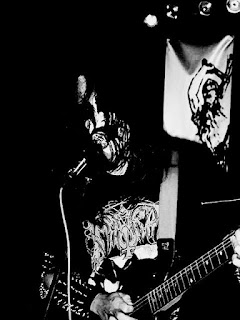