Here is another sick festival with Impiety at its sharp peak! This one will be based in Kolkata so you know whats your dark fate is if you live there or close!
Here is some words from the source!

"Order of the Heretical Trident Festival" is conceptualized to uphold and ignite the black flame of underground extreme metal sensibility, aesthetics and essence in most uncompromising and unapologetic way. Envisioned by Extremist Black Cult - Putrid Ascendancy, Kolkata, India; the concept of this festival is to provoke and create an impulse for extreme music and support the bands with original music that comes with a point of view, hatred and misanthropic visions.

Kolkata being one of the current epicenters for quality Extreme Metal culture, seems like the one of the best places to organize Order of the Heretical Trident Festival!

The first edition will have local demonic entities as well invaders to conjure up a vicious line up! Invading  India for the second time, are Barbarian Black Metal Hordes from SingaporeHell - Mighty Impiety who are acclaimed for their brand of barbaric and devastating Blackened Death Metal perversions.
worldwide and one of the pioneering extreme metal artists to emerge from Asia beside Abhorer, Sabbat or Abigail and conquer the world underground.

Fifth band to devastate is Thrash Metal battalion from kolkata, Armament, They play no bullshit straight up old school thrash metal, a cross between brazilian tradition and teutonic sensibilities.

and last band is city's newest black metal psychopaths Grim of Catastrophia who play black metal in nidrosian tradition.
Putrid Ascendancy, the very first and most coveted extreme music cult of Kolkata, one of the largest metros of India, often hailed as Kvltkata for its new blood spawn of anti human metal revolution and propaganda (for bands like Necrodeity, Tetragrammacide, Banish, Kapalin, Goatpanzer, Chhinnamasta, Armament etc,) has been plotting against weak metal trends since 2010 end and have been conspiring against the false traditions to eradicate and crush under their spiked boot of death! 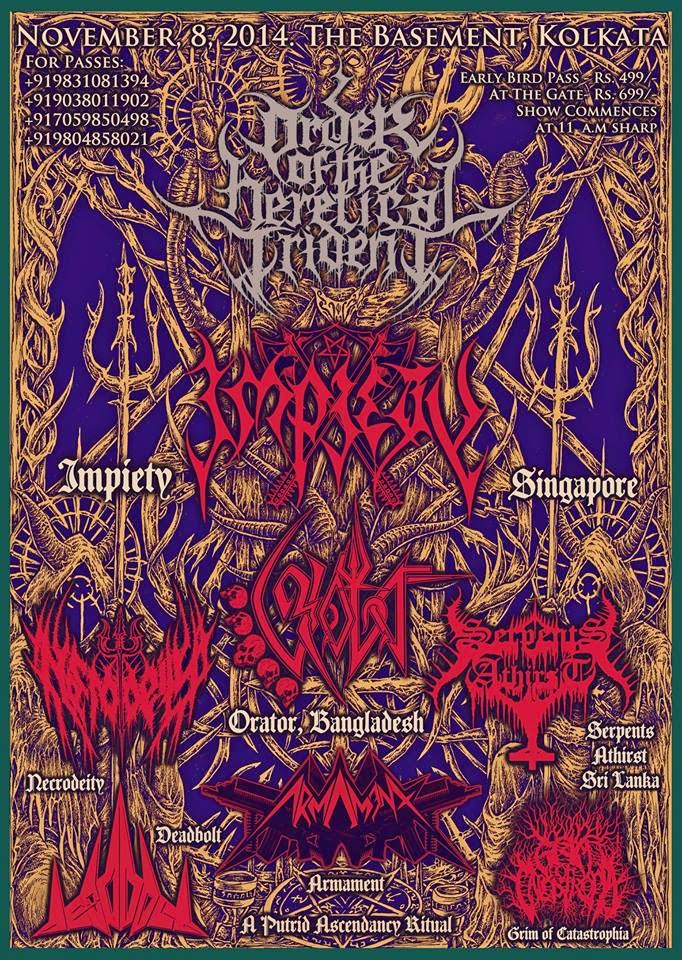 Here is the link to it: