DSBM is not a genre i general like nowadays without some exceptions here & there so that being said you understand that i hesitated first to review a band named Suicidal Madness... 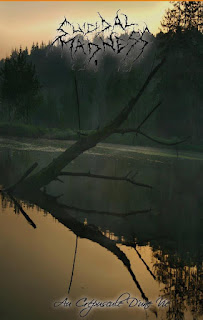 But fortunately my hesitation was not in place this time as this French band concocts a bunch of pretty solid and engagingly bleak black metal, the usual fall pits in this genre is more or less avoided here and nothing really gets on your nerves as the vocals (in French which is a plus) is working nice without going overboard with crybaby screams etc. Some vibes and atmospheres is both reminiscent of some good mid-era Shining and some Burzum (not surprising that they also here have a Burzum cover.)The riffs is not repeated to much and has some really nice parts especially the main riffs in song 3 and song 5, the music does not really gets me down and depressive but gets me more interested in listening to the actual music here rather then go and play some "meat-violin" with my arms. hehe Production is well balanced and suits the mid-tempo music, all is heard as one could wish for.

A good put together release (actually this is a tape re release demo from 2013 and a new full length album "Les larmes du passé" is out now also) that gives enough of dark personality and musicality to stand above the average in this genre....which is not that hard really though, but they feel sincere and also quite mature which is seldom the case.

Well worth testing out even if you are like me and dont usually enjoy DSBM and if you already are a fan of this genre then go get it now!

Released through  DEATH TO PEACE PRODUCTIONS 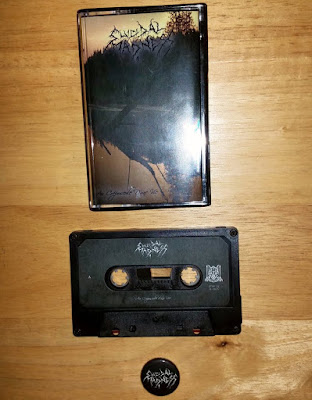