1.Greetings!
How is you day in Spain!

-Salute,
Another warm day in Spain, summer is not for me.

2. First i am a interested in the standard thing like when & how did
Supremative got created as a band? Did you come from other constellations before this?

-We started Supremative in early 2013, we formed this primitive invocation without any idea of being cool or famous, we don't want to be popular around the modern black metal assholes, we don't need the acceptance of some 40 years old selective judges of the underground metal.
We forge our hate to spread it around the globe, that's the reason that Supremative got created as a band.
We play in other projects but we would like to keep silence about that.

3.Your first and only release so far is the demo "Servitude of the Impurity" from 2013, it looks
and sounds like you guys had a firm vision on what type of hate to compose right away but tell me
how your thoughts was at the start and under the work of this demo. 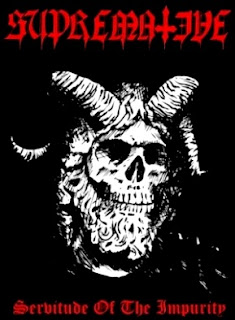 -As I said Supremative's existence is based on hate and impurity. It's not necessary to say that we don't want to play technical modern shit, we are focused in sound like a primitive horde of pure filth.

4.Bestial Desecration Records released the tape (limited to 66 copies), how did you come in
contact with this label?

-The tape was release originally by Ruptura records and Conspiracy recordings, 100 was made, then, Bestial Desecration records wrote us for a reissue to help us to move it around America.

5.Ok, can you shed some light behind the lyrics on the track "Servitude of the Impure Messiah "?

- I think the song speaks for itself. It is a invocation of lust and death, another hymn in the name of the Antichrist, a menace for the devotes of the Nazarene bastard. The messiah that we claim is the Judeo-Christian representation of the Impurity, you can call him however you want, Satan, Lucifer, Azazel, Masthema, Belial or  Baal Zebub.

6. I understand that the info text on Metal-Archives says "Despite their similitudes, this
band hasn't got any relation with Proclamation."... Proclamation is great band of course but what bands would you say have formed Suprematives sound? And what bands back in the days got
you interested at all to start playing music?

- We don't have any musical influence from Proclamation. We are worshipers of Hellhammer, Pentagram (Chile), Sarcofago, Sodom, Beherit, Blasphemy, Archgoat, etc. These are our real influences...

7.When did the Brazilian label Soul Erazer released the cd version of the debut and is it exactly
the same release?(not it need anything more) Did the patch come with the cd? 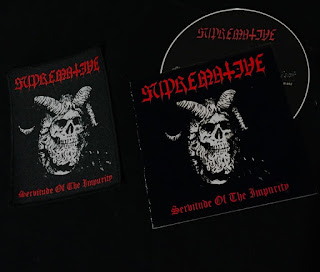 -I'm not sure but I think it was released early last year, and thats right, it's the same demo but released as Cd. The patch is not included with the Cd, it was made by a guy that runs a label in USA called Unholy Black Abyss.

8.Is there or have there been some great hordes in or from Canary Islands?

-I think there is a small crowd of old school black/death metal worshipers that keep it real.

9....ok no one mentioned no one forgotten.
Is there plans on a new release soon, a full album perhaps? And if so what can you say about it?

- We have 2 new songs that will be released as a new demo really soon, then we'll record a couple of songs more for a split 7" with the Greek hellenic hordes of Aiμα. We are planning to start the cycle with a complete album for the next year.