The gates open for an indulgence of a occult technical Death Metal band from Minsk!

1. Greetings!
How are the autumn treating you in Minsk?
I have little knowledge about Belarus besides some death metal bands and what I read earlier this year that Br602,307 was allocated state budget for restoration and reconstruction of historical and cultural sites.
hehe

-Heill Loki Þursakyndill! The autumn in Minsk is much more like the realms Niflheim in their worst manifestations.
But at the same time it is the most spiritualizing time of the year.The history of our
country interlaces with myths and conjectures that are lost under the piles of centuries.
The territory that once was a part of the biggest state in the Medieval Europe,
raised its glory beyond the clouds and ignominiously fell under the claims of more
greedy and ambitious neighbors. Multiple times broken, perplexed, erased from the
chronicles of heroic deeds and doomed to oblivion country with its own unique culture,
language and character. I’ve been traveling through Sweden recently and I can say
that our countries resemble in nature and landscape. It would be relevant to mention
a curious fact that we even had the same king at some point in the middle ages
(Sigismund Vasa). (To read more about this epoch look into the history of conquests
of Sweden 1655-1660 A.D.)

2. Tell me about have it all started back in 2009. And besides the music how you came up with that name? I guess some of you is deeply invested into the Sumerian/Babylonian Mysticism and other occult realms.

-The way from the awakening lies in the abyss of times, the names and the deeds are consent to oblivion, for they are full of imperfection and grief. As we see it, the only thing that matters is the creation in which we breathed in the fatal storms of magic. What concerns the band name – it was a conceptual continuation of song titles. An author's individual agglutinative neologism. In it's creation there were used some Latin, Ancient Egyptian, Akkadian and Sumerian terms of the Chaosatanic tradition. It entirely reveals the unutterable name of the anti universe. When divided into fragments, it creates the magic spell of the formless Lords of the prior Darkness.
And your guess is on the point: all the members of our order have deep knowledge in the mysteries of the ancient societies, and they are also initiated into the studies of death, it can be witnessed in the musical and poetic components of our creation.

3. How was the reactions when the first release "promo 2013" was unleashed? Was it only in digital format? I can’t really find these two tracks on the album so I guess these are exclusive for the promo? 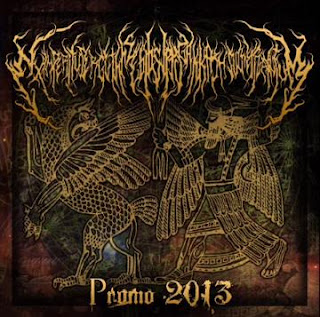 - In general, the release was welcomed. We issued the limited series of CDs that were sold out within a few weeks by the collectors from all over the world. Those tracks were not included in the album, since they had lots of nuances. Besides, the authorship belonged to the previous band members. 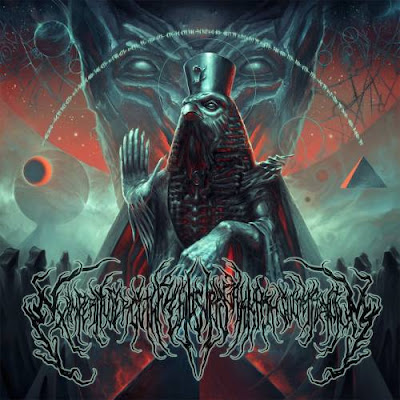 - This is a pretty vast and polyhedral topic. To touch upon it in brief is like seeing only the gleams of all devouring fire. This album is a folio whose profane pages conceal the postulates of Chaosophy, the echoes of magic systems and secret societies of ancient times. Every line and every melody hide the keys that open the tombs of reduced deities of intergalactic scale. The bloody horizons of Diabolical cults of deserts will reveal to your mind. And the funeral veil of might of the Death Lord will wrap your souls. May everyone commit pilgrimage to the roots of Emptiness and give meaning to the silence.

5. If you would recommend some literature about these topics which books should that be?

- It’s hard to recommend something particular. Assyriology is one of the least examined fields in oriental studies. And very often the literature has such a narrow specialization that it can be only interesting to scientists. In my opinion, the most interesting are those which are directly literary monuments of the ancient times (mythology, epos, poetry), since they were the least subjected to distortion and interpretations in favor of influence of times (as opposed to the official history). Surely, it won’t be useless to get acquainted with the history of conquests and succession to the throne, but it would be much more reasonable to pour the wisdom from the sourcebooks. Also, for better comprehension of some terms it’s worth paying attention to the textbooks and dictionaries of dead languages of the Ancient East. The knowledge is everywhere, but how strong you are to use it?

6. How does your rehearsal space look like? and how would a typical rehearsal look like for an outsider?

-Nothing special. It’s quite a standard working process. Tense concentration of energy and will.

7. I saw you plan to hit the road next year, i guess you played some gigs before this. How has those gigs been? Any good venues in your city?

-At this point we are not interested in tours, but only exclusive shows. We are working on a setlist and we are waiting for serious offers from the organizers. The band members are experienced live performers, but we’ve never played live as the project.


8. Is there some future plan you like to spill? Some distant musical release you working on or? To get some merch where shall one turn? I saw you wrote that you even seen some with unofficial shirts!

-In general, all our activity is an everlasting process. We started the construction of new dimensions, before the worlds that were already raised by us took forms. All the official merch is available on our page: http://mistfromtheeast.bigcartel.com

9.Thanks for answering my humble questions. Last word is yours.