On this bloody friday i give you A Transylvanian Funeral!

2. As you now have made & released your third full album how do you feel about your existing in the BM world?

- I rarely give thought to my place in the BM world. I don't play live on a local scene or anything like that, so other than the experiences I receive from running Forbidden Magazine and Records, I don't pay much attention. I would rather focus on writing and recording, when the energy is properly directed, it is also properly received.

3.It seems for me like you have gone from strenght to strenght! Have there been many trials and tribulations along the way?

-Not so much. I would say I have grown as an artist but there have been few problems with A Transylvanian Funeral. Being a one man cult affords as many benefits as it does problems. I try to focus on what works for me as a songwriter and spend little time trying to please others.

4. Tell us abit about the theme & story inside your new album "Gorgos Goetia". 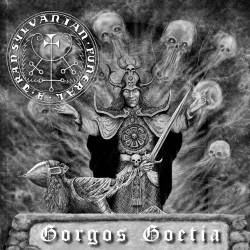 - My main goal for Gorgos Goetia was to write and record an album that was a stark contrast to my previous full length, 'the Outsider'. Instead of laboriously striving for pristine production and full album lucidity, I wanted a collection of songs that were relative to each other only by their raw recording quality.
I also wanted live drums, minimal guitar tracks, no keyboards, minimal vocals, etc.
I had and still have no intention of parroting Darkthrone or any other 2nd wave BM band, I simply didn't want to spend another 8 months fine tuning my songs and production sound like on the last album.

5. And i am curious about last years split "Alchemical Manifestations" with Plutonian Shore, did you know each other from before? 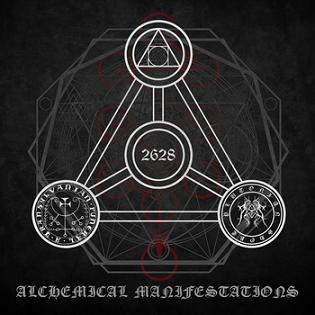 -We had been in contact previous to the release as I have worked with a handful of bands from San Antonio. When the band travel to Tucson, we meet up in my studio and discussed the possibility of releasing a split album, as we each enjoyed one another´s work.
Plutonian Shore is a hard working group of musicians who are honest and pursue the Great Work.
We both agreed our alliance was a natural event, so we aligned with it without difficulty.

6. There seems to be quite a few BM bands from the states that is just a one man constellation, is it hard to find people in the USA thats into this kind of satanic & occult music?

-It is, if one does not look. I rarely look for fans or people to work with. Recently, I think I offended someone because I stated I didn't have time to 'jam' or whatever. I stay extremely busy with music, my studio, etc. and unless someone has already established themselves to a certain degree, I remain uninterested in collaborations.
Many people enjoy the music from a fan perspective but have little emotional investment in the music or its philosophy. For many, metal is metal is metal and just another form of entertainment. I like to think of real art as something little less shallow. I certainly have no intention of entertaining anyone with my music, I would rather inspire them to write their own music, etc.

7. Do you have any prior bands before your current one?

- Nothing so extreme. I did a project called Scorpio Rising that recorded an album right around the time I stopped drinking and using drugs.
I had been working on the material for years, so in my inebriated state, I was unable to have an honest vision of my work, and a less honest representation thereof.

8. So whats in store for the rest of this year?

- I hope to begin writing again soon. There are a few bands I am working with and hope to have a few more releases out by the new year.

9. As i understand you have the Third Eye Audio Recording Studio also, which bands has done their hard & bloody creations in there?

- Previously, the studio was open to the public but that has not been the case for many years. I am talking with a few artists right now about mixing their material and I have done mastering for a few bands I have released. The name Third Eye Audio has not been used for years, although I have considered it for the future....

10. Great many thanks to you for little interview!
Any last words?

Thank you again for your time. I appreciate the support.
There is no law above do what thou wilt! 93!