In this hollow & dumb world hate is necessary, today i talk to the man behind the band Hohl.

- It is quite gloomy here in Minnesota right now, so I cannot complain.

2.This year of great disillusion seems to be a very active year for Hohl?
Was your demo "Ascension" from last year the calm before the storm so to speak?

- So to speak I would agree, though I would hope that Hohl would be characterized as anything but "calming."


3. Name & describe the releases that will see the light of day under 2013?
- the first thing I recorded after "Ascension" is an album titled "Megiddo" which is a sequel of sorts. Where "Ascension" follows three characters through their exploration of esoteric dark power and their unleashing of such powers, "Megiddo" is three more characters and the realization of "Ascension".

After that I have recorded an album titled "A Return to the Age of Barbarism" which is seven songs worth of powerful Black Metal enchantments denying all the modernized form of "black metal". After that is an album titled "Apocalyptic Hymns" which is a terrifying dark ritual whose purpose is ti unleash the underlying vibrations of horror, fear and hatred.
And now I have begun work recording the next album which is to be titled "Götterdämmerung". Each album building and expanding upon the philosophies the last.

4. One famous Swedish musician (Yeah it is Niklas K from Shining) have said that the biggest approval/acclaim one artist can get is if one listener (in this case) will kill somebody or themselves with the strength/inspiration from ones art.
Is that something you agree with?
- Before I answer I need to state clearly that 'Hohl' is in NO way a DSBM, suicidal or any other of these fake, faggoty emo "black metal" sub genres and I do not believe in using Black Metal as some sort of cathartic tool.
That being said, I definitely see where he is coming from, powerful art should have an equally powerful reaction.  In a social darwinist way I see a person committing suicide as a result of my music as a very positive reaction, and I have placed suicidal imagery in my music for that purpose.
'Hohl' is not a place of therapy, there are a lot of "dead" people on this earth whose purpose would be best suited as fertilizer for the plants and feed for the animals.  So if I can expedite that process through my music, I cannot see how that can be a negative.

5. As i have understand you was not "happy" with the BM climate in your country (or anywhere) and that displease became the black fire in itself and gave birth to Hohl, do you feel that your displease will morph into more power as Hohl grow by each release?


- No I don't, I don't concern myself with these lesser forms, it is just in this age of information I have become aware and have felt the need to draw a line in the sand, so the speak.
For all practical reasons Black Metal is long dead, a faint bastardization of what once was.  If 'Hohl' were to be reactionary it would be dishonest, there is still a black flame lit, and that is all that matters.
Bands like Behemoth that trick people into thinking they are being dangerous are fucking gay.  We all know that Dimmu Borgir and similar bands are not only not Black Metal but a cancer within this type of music.  They are knockoffs, cheap counterfeit commodities, nothing more.
If an artist of integrity gains recognition for his work I can see nothing wrong with that.  But, when it becomes about merchandising, "moving units" and being a rockstar, than they are nothing but lap dogs and should fucking be put down.
And as far as these hipsters and punk rockers playing "black metal" goes, it is just another corner lined with shit and filth.  But, I can't be concerned with temporary trash, weakness can only survive for so long.

6. How would you describe White Bear Lake in Minnesota where you live in? Not that you maby have the need to hang around people that share your viewpoints and ideals all the time but is there any other good BM bands there or persons with similar goals as you?


- White Bear Lake is a small homogenous town a half hour outside of the major cities here in Minnesota.  It is quiet and close to nature, which I enjoy tremendously.
As far as people go I do not go out and socialize and do not know any people in my neighborhood, which is very appealing to me.  The majority of the bands are from the cities and they are all quite good.
We have a nice group of serious Black Metal bands here including Atrum Inritus, Masshu, Maledicere and Burning Bethlehem.  All of which should be known among the Black Metal community for their music and integrity.

7. As i have read Hohl have never played live but do you have anything like that in the plans or do you prefere not to play live? As i listen to some of  your songs i get strong visuals and can see it work out greatly as a concert if everything is done right anyway.

- I look at 'Hohl' as less of a metal band and more of a work of philosophy, because of that just playing live to play live doesn't feel right to me.  The idea of putting on a show for a group of beer drinking, hard rocking metal fans has absolutely zero appeal to me.
The purpose of a 'Hohl' concert would be to disturb the seemingly "hardened" minds of the Black Metal fan base.  If done for the right reasons, with the right musicians at the right time and place, I cannot rule it out.  But, as of right now I give it next to no thought as an actual endeavorer.

8. Is there any plans for doing splits with some other horde?

- There are talks, nothing I wish to comment on.

9. Well thanks for this interview, any last words? 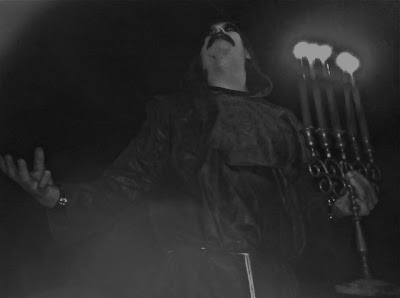 For more information check out the FB page:
https://www.facebook.com/hohlterrorcult