As one of Belgiums more horrific & great black metal bands Huldrefolk decides to leave the putrid swamps a final chat is the least one can do for a fitting closure.

Respect to Drang and the pestkult!

1. How,when & why did you start this Medieval Trollish Pestkult called Huldrefolk?

- Somewhere in 2004 Leshyj and I started jamming. Leshyj played guitar, me on drums. Our actual plan was to make pagan black metal but due the big trend of pagan metal coming up that time, I decided to stop that and concentrate on another theme. A few moments later we found Hammerman who was quite enthusiastic about our plans. Because of the fact that medieval history was and still is interesting stuff for me, I decided to write lyrics about the dark ages, when superstition was very common and late pagan belief was mixed with early christianity.
I decided to make a concept about trolls living in the swamps, brewing pestilence to unleash upon mankind. That’s how Medieval Trollish Pestkult was raised out of the filthy swamps of Flanders.


2. Whats does Huldrefolks lyrical themes consist of?
- All our lyrics are about the middle ages. Most of them about the negative and cruel facts like famine, pestilence, natural disasters and social problems by then.


3. Please describe each of these vibrant musical releases! 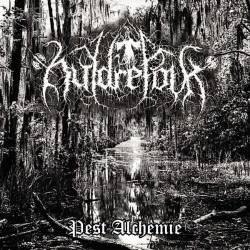 - Our demo, was recorded at a rehearsal with very very low quality, I think we only used one micro hanging in the middle of the room. That was also in the time MySpace was popular and useful for bands. A few months later Slava Satan discovered us on Myspace. 100 pieces were made (50 tapes and 50 cds) and it was all sold out very soon, despite the horrible quality. I didn’t had a good voice by then, it developped better after this one. 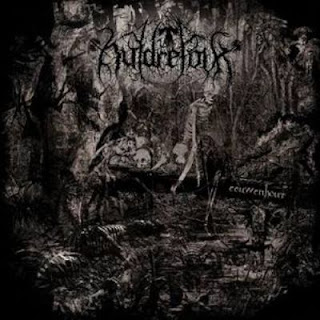 - First full album and first with a complete line-up. Was recorded at the homestudio of Hammerman. Some songs of Pest Alchemie were re-recorded and you can hear there’re sometimes a lot of difference between the songs. Hammerman did also the mix and that wasn’t a very good move because he wasn’t very experienced by then. Drums were way too loud, guitars and vocals too silent. Also the whole stuff wasn’t mastered at all. But also despite that, the thousand pieces were sold out quite fast. 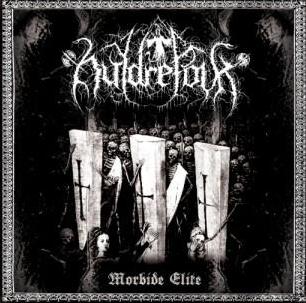 - Also with full line-up and this time the lyrics were way more poetic. The songs were more similar to eachother. The theme was “elite” on this album and also our looks changed. The dirty old destroyed shirts were changed to capes with hoods and huge boots. The story was that the drunk dirty trolls got very rich of brewing pestilence and became “morbid elite” now.
We used also samples of the old Swedish film The Seventh Seal in the intro and outro.
But, same problem as on Eeuwenhout, Hammerman did a better job but again the drums were way to loud, and guitars too silent.
We got a great deal with Iron Age to release the album. Unfortunately we got many gigs cancelled because of several reasons, so we never had a good chance to promote this album.

4. I know that you have been clashing heads with human dumbness like back in 2010 with your gigs in Roermond etc, have more or less Huldrefolks existence been "under attack" or was it just this sole time?

- It was that time and it was mostly our own fault. We were a black metalband, so we liked to provoke a lot by playing with the “wrong” and we thought we would win sympathy of people thinking we “dare” to play with these bands. But actually it turned out differently.
We got sympathy but it’s negligible, we were punished a lot by cancelling many concerts. Still people think we are dealing with politics, while there’s nothing we say in our lyrics about that.


5. I guess your real audience see you what you really are and are fans by the correct reasons, how has the responses been from your "followers"?

- We got and still get great responses of our fans. Sometimes I couldn’t believe people knowing Huldrefolk in their country or seeing people on festivals wearing our shirts, that’s of course amazing. For that reason we also receive many sad reactions when I announced our split.


6. Can you tell us why Huldrefolk is closing its swamp filled crypt now?

- We weren’t all three fully committed anymore as we were before. For me, Black Metal was once a very important part of my life, but I developped and my visions do not fit anymore in a typical (negative) blackmetal atmosphere.
Don’t get me wrong, I still listen to BM and I still stand for 100% behind the words I wrote for Huldrefolk. But other music and things started getting more important. That’s also the reason we didn’t had any time left to write a new album. And I didn’t wanted the band bleeding to death like so many bands.

7. Are you satisfied of the art & legacy that you leave behind or is there something you would like to have been differently?

- Of course I am very satisfied and I’m sure we could have pushed it much further in Black Metal. If I could change something it’s probably the production of both Eeuwenhout and Morbide Elite, but without that we wouldn’t have learned so much. Same with dealing with politics. It was actually because I hated (and still hate) bands with statements on their website like “we are not a political band blablabla”. How on earth can you be credible when playing the most controversial genre on earth (black metal) and while making statements that you don’t want to hurt people’s feelings? But of course we could have avoided problems by avoiding some things, without making stupid statements, but it’s too late for that. 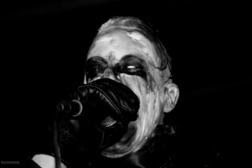 8. As one gate is closing another is opening they say.... can you share with us some future visions?

- We’re all in several bands right now, and some of them aren’t black metal. In my bands are no other members of Huldrefolk.

- I already said thanks to all our fans, bands and labels, but I forgot to mention you guys of the zines, like you! So thanks for your time and effort.

You will hear us again soon and maybe you won’t get it that it’s us, so, up to you to find out! Sieg Pest!