From the Upper Austria comes a great grief and mad hate in shape of Svartsorg!

-Hailz!
Bloodier than hectic, we recorded our new album in March of last year, so the hectic
part is gone – just the bloody aggression to finish it has come,
because we just received the master-mix of the songs this week.


2. Pretty big to play with Nargaroth! Did you know each other from before or
how did this thing happened?


- Yeah, it’s definitely an honor to play with them again. In our opinion one of the best
BM bands ever!
We knew each other before, but that had nothing to do with the actual booking for the
concert! We contacted the promoter and told him about our interest in playing the gig,
thanks to the mighty dark lord; we got the Slot and will raise hell with Nargaroth once
again!


3. In your own words how would/should a traditional Svartsorg concert be like?


-A Svartsorg concert should be located in an old dark stone cellar, with dark light,
feeling yourselves and the environment rotting while listening.
The Emotions should go up and down; people should be confused between aggression
and depression!
A “Manic Schizophrenic Storm” in your head!


4. Your first full album "In Jenem Kalten Winter" that was released back in
2011 but you have been active since 2007,
Have you released some demos before the album or? And please describe that
album for the people in the unknown. 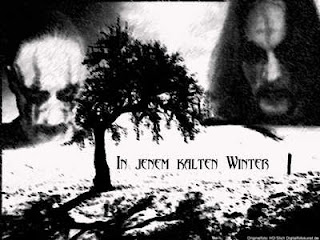 -Svartsorg was founded in 2007, but there are no demos or releases, because we were
only a two-man project until autumn of 2009.
We finished our line-up in the end of 2009 and played our first show in March of
2010. There are tons of unreleased songs that we will bring up in the future. But there is no
other previous material of Svartsorg.
“In Jenem Kalten Winter” and our new album “Agonie des Lichts” differ in the
emotional part. The first Album had much more Depression in it, because we chose
slow Tempo and Guitar Riffs to represent these emotions there.
“Agonie des Lichts” also contains lots of Depression, but there is much more Odium
against Life and the World itself in it. In our words: “Hateful Depression”. It’s about
pain, sorrow and overall: HATE!


So as you can imagine, it contains much more aggression!


5. What’s Svartsorgs internal aim & motivation? And how did you come up with
a Swedish band name?


-The internal aim and motivation is the music itself and the emotion in the music. It’s
our only way to describe the feelings deep in our lost souls and that’s exactly our aim:
To describe these feelings!
Our only target is the music!

Regarding our Swedish / Norwegian name:
We were looking for a name which expresses what we are and what our music is
about. We could of course have chosen a German or English name, but Svartsorg
expresses exactly what we are. It describes us and our music better than any other
name could ever do!
Svartsorg is a journey through the Black / Svart feelings and emotions!


6. As I understand you work on your second record now "Agonie des Lichts",
how is the creative blood force in Svartsorg camp pumping?

-Let us surprise you and let your blood be frozen when it’s released!
As we said we added a massive charge of hate to our usual depression.
As a first impression, we put a rough mix of the song “Cold Mountain of Torment” on

YouTube. (https://www.youtube.com/watch?v=IHjqb7DEJGU)
7.How would you describe Austrias BM-scene and is there any band that should get more attention?

- I think it is like everywhere!
The most concerts are underground and you have to know the scene to get the informations about the events.
There are many Bands in Austria who should get more attention, e.g. Sakrileg, Grimforst, Asphagor, Selbstentleibung, Svarta and Gefrierpunkt. But of course also bands outside Austria like Sadistic Sacrament and Morgengrau."


- We have T-Shirts / Girlies and patches, more things will be coming up soon and will
be available via Cursed Records and the Band.


9. Are you pleased with your record label Cursed Records? Not that you should
not like it but I don’t know so much about them.


-Then you should find out more about them ;)
It’s a great Fucking Underground Label and yes, we are pleased with them

10. May the great serpent guide you to HIS throne! Any last words? 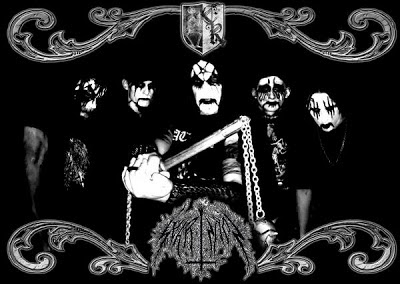