The bringer of plagues, the carrier of the final salvation from life. It´s the Pest rider! Or as it is called in germanic  language - Pestreiter!

1. Greetings from Sweden! How are you doing on this rotten & dry summer day?

-Greetings. Yeah, it's damn hot in Germany as well. All you can do is to cool you down with a fan and lots of cold beer! I hate summer and hope it will be over soon.

2. So how does it feel now when your new born album "Todesweihe" (Consecration of death) is out & screaming on the cold outside? 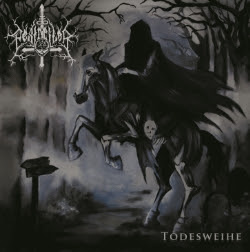 -It feels absolutely awesome, but too much time went by. It was planned to be released in 2008 and so it's not very representative any more in my opinion. We had many line-up changes during the past years, which was very energy-sapping. But now we hopefully have a stable line-up and can play some more concerts and release a new Album in 2014.

3. How was the artistic process for the album? And how would you say it differs from the debut(under the Pestreiter banner) album "Der Virus Mensch"? 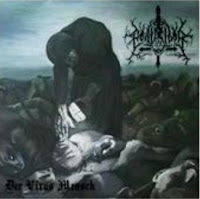 - In fact "Der Virus Mensch" never was a real album, but a demo. Some information on the internet is wrong. It was completely recorded live in two days at Schallsucht Studio. This time we just recorded the drums and the vocals there. All guitars and the Bass track were recorded at our own home studio in the rehearsal room.
We had more time to fix things.
Our song writing is very simple: somebody is coming with an idea and the others say 'yes' or 'no'. When a riff is cool, we are working it out together, the is no mastermind in the band.

4. And where/how did the studio time go? Smooth like a babysbutt or rough like a demonic beard?

- It was very smooth, because we had no stress while recording.
Our past drummer L, who played on the album, recorded all tracks in two days and as I mentioned before, we had a lot of time for the rest.
We are now going to record some new stuff for a split with Sarkrista and we are going to do it the same way. Our new drummer M is going to record his parts at the studio and the rest will be taped at the rehearsal room. Over the years we learned much about recording guitars and bass and this will definitely be heard on that split.

5. As I understand you begun this horde under the name Berzano in around 1998, this is maby old news to some but what made you change bandname? ...combined those active years with the time under Pestreiter one could say you celebrate 15 years now.

-Yeah, that's right. Steelcrusher was the founder of Berzano in 1998 and G and myself (under the pseudonyms Akaras and Aragon) joined up one year later. We had a fucking great time with many ups and downs. We were very young and inexperienced but because of this we sounded exactly like Steelcrusher wanted Berzano to sound, hrhr. But we became better on our instruments and wanted to show it.
So, after 8 great years, Steelcrusher decided to leave, but didn't want us to use the name Berzano.
We saw this as a change for a complete reset for the band and choose the name Pestreiter, because it sounds nice and is memorable. In the first line up were 3 of 4 Berzano member and so we played Berzano songs in the beginning.
Today, we have only two old songs left in our live set.

6. Nice to see you team up with Sarkrista for a split! How come you hooked up? And the choice of cover artist was a good one.(Misanthropic Artworks) 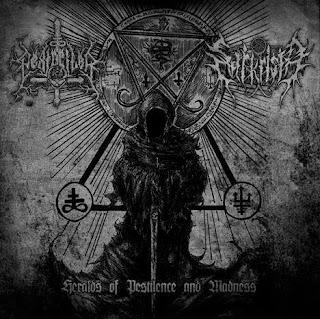 - They contacted us via Facebook. We played a concert together a few years ago and now they came up with the idea to make a split ep.
They contacted Sang from Misanthropic Artworks for a cover and the next day it was finished. It is absolutely awesome. I think we're going to work together with Sang in the future again, because he is such an incredible artist!

-Oh, it was just one of the best gigs we had for a long time. It took place at our home town and this gave us an extra bonus of course. Our new guitarist J and our new drummer M are just, what we needed.
They both fit in perfectly and I think, we just reached another level with them.

8. How looks the plans for the rest of the year?

-We are entering the studio in a few days to record 4 songs for the split ep and hopefully it will be released soon. After this we want to play some gigs with Sarkrista and one or two other bands.
At the moment we are looking for some cool locations to play.
Maybe we come to Sweden, too. It would be awesome to play a few gigs outside of Germany, but it's difficult to organize, so if you know a club or so, just inform us please hrhr!
We are also planning to shoot a video for one of our new songs. I just can't wait for it!


9. Thanks for the interview guys! As the traditional procedure you get the final laugh.

- We have to say thanks to all the sick motherfucker who supported us over the years and especially to RAF from Humanity's Plague Productions for believing in us and giving us the chance to release our first album worldwide. And thanks to you for your interest in our music!
Hopefully, we will talk again in the future!
Have a good time! 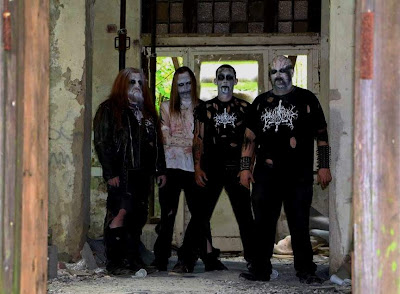