The frosty grim winds of shadow pasts closing in over your dying soul....

Hails!
1. As Skuggan is a new dark entity on the Swedish nightsky please introduce yourself.

-Skuggan rise mostly in March 2013 in one of the coldest and grim forest of Sweden but its not completed until May, starting with the release of the first demo song called "Fördömde Till Avgrunden". Yes, Skuggan is a new entity but I am not new into the Black Metal world, I have been playing Black Metal for a while on another bands/projects before and right now. 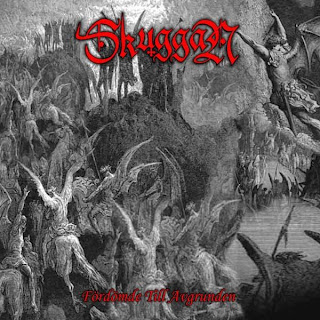 2. Your first one-track demo "Fördömde Till Avgrunden" that got out earlier this year, was this only digital released and is this song also on the coming full album “Kejsaren Av Ett Svart Rike”?

-Yes it is only digital, I haven’t press any cd or tape yet but im planning to print one copy for me sometime in the future. The track will come on the CD debut yes.

3. Can you describe a little more in depth about the themes that resides in the album “Kejsaren Av Ett Svart Rike”?

-It was formed as i said in the Woods so most of the lyrical concept is related to the dark side of nature along with some Satanism and Darkness which is always part of Black Metal. Never is enough talking about Darkness and Satan.

4. How was the workprocess for the album and where did you record it? Do you play all instruments by yourself?

-It was recorded on a cabin in the forest where i have some equipment and such and yes I play all the instruments on the album.About the process, I decided to lock myself into the cabin for 2 weeks and write and record the album, that includes mixing, engineering also.

5. It must felt great that the German label Ewiges Eis Records took you under their wings so to speak? Do you feel that the working relationship between you & the label is fruitful?

-Well, I tried to contact many labels around the world trying to get a record deal to release “Kejsaren Av Ett Svart Rike” but I think most of labels are fucked up you know, only Ewiges Eis was the one who came up and offered me something attractive so yes, Im really glad to be with this great label now, I can’t tell you if its fruitful yet since the album is not out yet, we will see that in the future.

6. Is there plans on some grim t-shirt, etc?

-Yes there is but it will be until the album is released i guess.

7. I must say i fell in love with the cover, that black epic feel of it combine with the nice red Skuggan logo and red frame around it made a sweet impact on me, nice traditional and grand! Who made the art by the way? 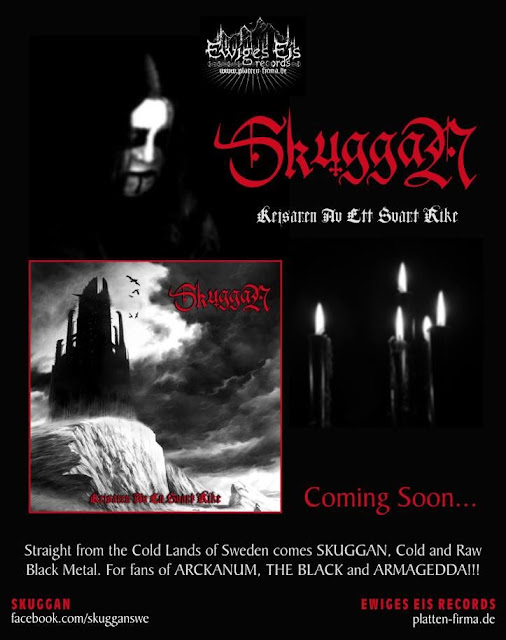 -I like Black and White on cover arts but Red always has a good impact too. I did the artwork.

8. So after the album drop how does the future plans look like for you?

-Plans are to keep working on new songs for a 2nd album, thats all, Skuggan is not meant to play live or something like that, is just to unleash the darkness inside me and to press how the cold, grey sky, the dark forests and grim lakes of Sweden inspire me to write evil music.

9. Thanks for your time! Looking forward in getting my teeth deep in the album.

-Thanks for your interest in Skuggan, is really appreciate it.