A unimaginable horror crawls up from the depths of Germany.

1. Hi! Thanks for taking time off for this interview!
As i understand you have just recently ended the recording for your first full album?
Where and which studio where you in & did everything run smoothly?


Jens: That's right, we have just finished the mixing and we're absolutely happy with the result. We chose to record in the same studio, where the "Cosmic Horror" demo was done, which was the soundlodge in Rauderfehn, Germany with Jörg Uken.
The reasons for this are simple: We live nearby and I have known Jörg for about 24 years now and did a lot of recordings with him. It's always very smoothly with him and I'm pretty sure he thinks the same way about working with us.

2. How many tracks will the new album have and can you describe the ancient horrors one will experience while listening to it?


Bernd: Altogether, the new album will contain 8 tracks of which 2 tracks have already been released on the Cosmic Horror demo, but with a different sound. On the LP version there will be a coversong as a bonus track. With this record we hope to deliver the perfect soundtrack to H.P. Lovecraft's world of cosmic horror, nightmares and madness.

3. Your debut a 4-track demo "Cosmic Horror" came out earlier this year through the label F.D.A. Rekotz (Goregast, INCARCERATION etc), was it only a tape release?
Will any of these songs be on the full length?


Jens: Yes, it was only released on tape, but it's still downloadable via bandcamp. We re-recorded all four songs of the demo, but only two of them will be on the album as Bernd has already said. We're still arguing with each other about which songs that will be, haha!


4. As your demo and album is made fairly closely i can assume that the overall sound and style is pretty similar? As one who loves the demo will then explode from the album in other words.


-We hope so, ha ha. You can be sure that there is no change in the style of the songs as they were all written within the same period of time. Some of the songs are a little bit older, some are newer than the demo songs, but we still like all of them. The overall sound is just slightly different from the demo, because we used a dry and very natural guitar tone this time.
Maybe we sound more ”American” and less ”Swedish” this time.

I personally think that on the demo, most of the songs were mostly straight froward while the other songs are more diverse and dynamic with more tempo changes. The sound is good, but not overproduced. Again we used no drum triggers or clicktrack.

5. Speaking of the demo, who did the cool blue old school artwork? And i must say that it worked really well with the bloody red tape cases. Was it the same who did the bandlogo? 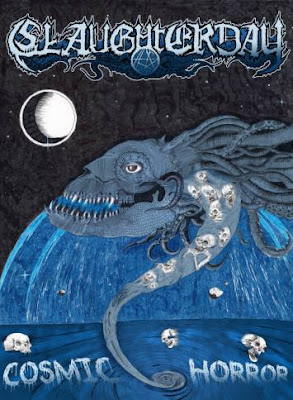 Jens: The logo, the artwork and the layout was created by Thomas Westphal from the Necromaniac zine. We also love the old school vibe of it , but the red cases were Rico's idea. Unfortunately the artwork is a little bit too dark due to the thick paper on which it was printed.

6. Have you done any Slaughterday gigs yet? If so where & when did they occur?

Bernd: Up to now there have not been any gigs for Slaughterday, but till the end of the year we will play about four gigs. Right now we are quite busy with organizing the layout for our record and rehearsing for the gigs. We really look forward to these gigs and hope that people will enjoy our live performance.

7. I see that the autumn/winter will be a busy time playing live, which events will you attend to?

Jens: Fortunately we are able to play some shows, because some friends of us from INGURGITATING OBLIVION will help us out live.
So far 4 shows have been confirmed: On 10/18/2013 we will play the Morbid Catacombs Festival in Berlin with Krypts, Wound, Lifeless, Decaying and more. This will be our very first show ever and I'm really excited about how it's going to be.
In November we will play the Ear Terror Festival in Emden (11/08) which is run by our friend Mr. Deichkot, who also has his own local radio show. On November 29th we will play in Wermelskirchen, Germany with Rico's band Goregast, Lifeless and Wound. The last gig this year is on 12/07: We will play the Nocturnus Fest with Master, Sulphur Aeon and Dehuman Reign.

8. I saw the nice Slaughterday t-shirt you sold, will there be some new for the festival or the when the album drops?

Bernd: Yeah, there will hopefully be new shirts for the upcoming gigs. It's all in the works, but I'm pretty sure that we will have some cool new designs coming up. There will definitely be a shirt with the album artwork for the album release.

9. Well, thats all for this time!
Good luck with all! By the way any release date for the coming album?


-First of all thank you very much for this interview.
We really appreciate your support!
The new album called ”Nightmare Vortex” will be released on the 6th of December via the German label F.D.A. Rekotz. 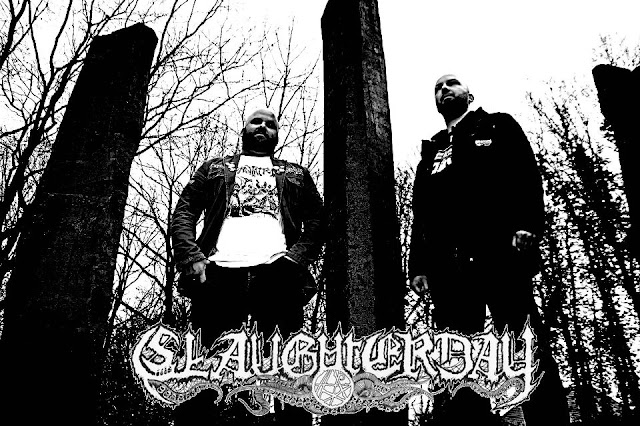