1. Greetings Astraeos!
In what I have realised is that you have been very active and involved in some bands under the say 5-6 years and only now recently started to run solo.
...did you get tired in compromise with others in the name of creation?


-To be honest, I use to run my own, solo projects. Morbid Fog, Ravndal, L’Hiver, Theosis… Even my other bands, Vetusmora and Mortuus Sum are only studio projects.


2.And can you briefly describe the other bands you were involved in? Either way i guess you got out some experiences from all installations that shaped you to become Theosis?


-Morbid Fog(R.I.P.), my first project, Ravndal, an atmospheric/epic black metal project, L’Hiver, a doom project, Vetusmora, an ambient/dsbm project with Pyriflegethon from Dizziness and Ineluki(Northern Frost, Apocalyptic Fire) and as a vocalist for Mortuus Sum, my friend’s Yngve(ex-Acherontas, W.E.B., Dizziness) own project.


3. Already you have released two one-song demos and one full album, when did the work for this begin? What can you say about the demos? Did you search for you right sound or? 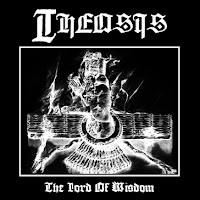 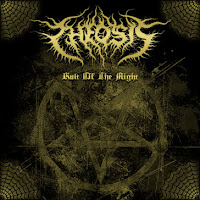 -The first demo’s song is something different from what now Theosis are.
More progressive with occult melodies. The second demo and the full album are pure, fucking black metal assault.


4. Can you visualise in what you have prepared for the listener to be devoured by on this debut album? And have you been in contact with any label to release it on? 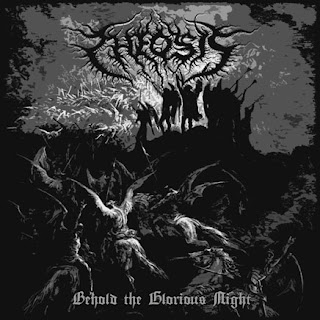 -Satanic Warmaster, Sargeist and of course the ALMIGHTY Darkthrone are some of my influences for this album, but I prefer the listener to consider it.


5. In what light is the bandname theosis used for here? As i understand it it can be roughly translated as "the process of coming into union with God".


-That’s right!!! But the reason I used the name “Theosis” is one of my favorite bands and one of their albums, “Theosis” by Acherontas!!!


6. By the way nice choice of cover (the chant of the barbarian wolves by Satanic Warmaster)!
Was there any other specific reasons for you other then it’s a great song to cover this & has SW been a big influence? And i also saw that you wear an t-shirt of one of Greece BM-prides Acherontas.
Is there any other band that have shaped you in any way?


-Satanic Warmaster is my favorite black metal band and I wanted to do something as homage for them. Acherontas as I said, is one of my best bands, mainly for their philosophical and poetic occult style.
Judas Iscariot, Rotting Christ, Darkthrone and Summoning are some of them too.


7. Do you consider Theosis to also be a live-band in the future? Is there some "underground BM-scene" there in the town Karditsa?


-No immediate plans for that but who knows.

Only two other projects. Nothing else.


8. How does the rest of the years plans look like?


9.Well thats all for this time! Thanks for your answers and your time spent. 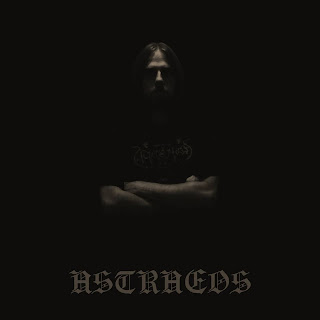