Initiation - A Ritual of Blood, A Pact of Ashes


With a bit paradoxical mix of calm water shimmering and a clear clinging..cling clings in a ritualistic fashion, moody keyboards and some anguished screams you is welcomed into this new album release from this American one-man band Initiation. (First release was the demo Nyctophilia I from last year) 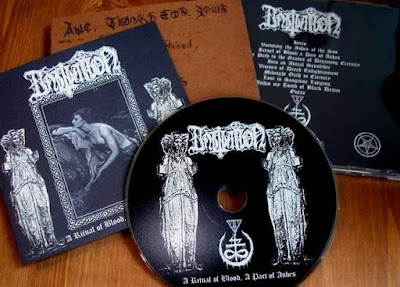 The music is both harsh and melodious in a way that strokes me the right way...straight away.
It has inspirations from both Australian hordes (DTL etc) as Finnish ones (Sargeist etc), sure some comes from his own soil as well but either way it is its final outcome that is really delightful here.
Cold but emotional as well as hateful and engaging.
A. Nycteriis fills his rituals with a good variation of mid speedy guitar work and overall compositions to make sure each song has its own purpose and drive, the mix is quite clear but stern and the only part that could be called "raw" is the vocals. drums and bass sounds just right as also.

Best songs (was a bit hard to pick out only three) is the title track that represents the albums sound and style and then i pick track 6 "Visions of Dread Enlightenment" with its more threatening and slower atmosphere and the extra raspy monolog vocals puts the I in Initiation in place.

Last but not least i take the last (9) (not counting the outro, which sounds more like a song without song rather the an outro. ) with its very nice guitar parts that really gets stuck in your mind,tight and conscious composition that really gets your appetite for destruction levitating higher.

As this album is released on the great South Korean label Misanthropic Art Productions you´ll know you get
a great product production and it should not be hard to secure your own copy of it which is recommended.
A extra plus for the layout design by Azathoth from Entsetzlich! 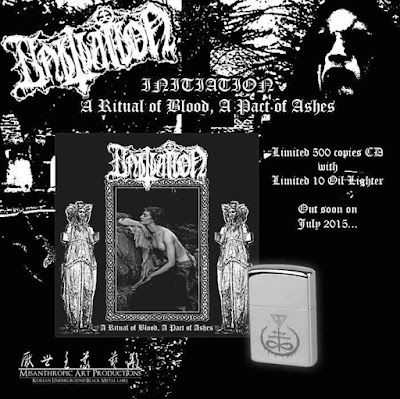