Time to speak with BST in the one and only Aosoth!

1. Thanks for taking your time to do this interview!

How is the vibes going in the Aosoth fortress?

BST: Things are looking pretty good. We're preparing for our first live rituals, which are to occur not long after the new album's release.
And our first ever official video will première today. (3 April)

2. Compared to your last three albums how would you describe the differences to
"IV: An Arrow in Heart"?
Please tell me about the main "theme" here?

BST: That album is the most mature we have made so far. On the previous one we had sort of found a specific tone, and we've come to perfect it with this new one.
The theme could be summed up as a search for enlightenment through the loss of all, especially the loss of sight, as a main step to truly seing.

3. When creating this new album where there many "kill your darlings"
in play or did you go from clarity to clarity? I guess you are very
picky in what gets out from your chambers.

BST: Those songs are all first shots. We don't overthink our music and we don't spend any time toying around and rearranging things. It's meant to be spontaneous, like automatic writing.
I'd say that's something that defines the way we sound.

4. the splendid & epic album "III - Violence & Variation" where a bit more impenetrable then the
murdering "Ashes of Angels" album, for what i have heard this "IV" is more
like a mixture of them both... is that somewhat a correct interpretation?

BST: It may feel that way because the production is clearer on "An Arrow in Heart". As far as the music goes, I don't really think so.
I think this album shows a natural evolution. Then again, we're not well placed to be the judges of that, we lack perspective.

5. Your new cover gives a different kind of "Aosoth feeling" (in a good way)
Almost romantic in a deadly kind of way. How did you choose the artist?
Any specific mentalvision you had that guided you to him?

BST: That amazing cover was painted by Benjamin Vierling, and we're honored to have been able to work with him.
It is a pretty accurate illustration of the themes develloped in the album.
Some people disliked it, or didn't understand it. It does require a closer look. 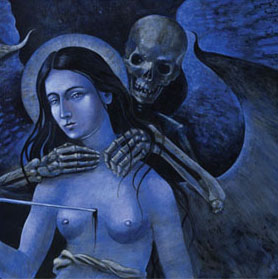 6. Is there any sweet merchandise in the making for this year?
Any plans for new Antaeus music? Loved Blood Libels!

BST: A couple tshirts designs should be printed, yes. As far as Antaeus goes, so far, there is no plan for any new music. We'll see what happens in the future.

7. How does your live plans look for 2013? You know we in Sweden wants you to come over badly and do a gig or two!

BST: We'll be playing a couple shows in France in early may, then we'll have a gig in the USA (Maryland Deathfest) on May the 25th. After that we'll play in Helsinki for the next edition of Black Flames of Blasphemy.
We did play in Sweden, at the Arosian Black Mass, a few months ago. We would consider any decent and serious offer.

BST: There is obviously Watain, with whom we already have had the honour of touring. Apart from them I guess Funeral Mist would be my favourite swedish band at the moment.