Tonight we speak with Draug from Kirkebrann!

1.Hails!
Thanks for accepting this interview!
Hows things in the Kirkebrann camp?

-Things are ok. We are looking for a booking agent so we can get some more gigs and working
on new songs.


2. Now when you recently released your first full album how do you feel about the whole
creating process? From the birth of songs to the studio stress, was it much trouble on the
way or did it go smoothly?

- It actually went smoothly. I wrote the songs except one, rogner made most of the lyric.
Then we played them for a while and re arrange some of them.
We have our own studio so the recording was no stress, but went pretty fast. Iwan did the mixing then we sent it to notodden for the mastering.
The most trouble we had was actually finding the cover art he he. 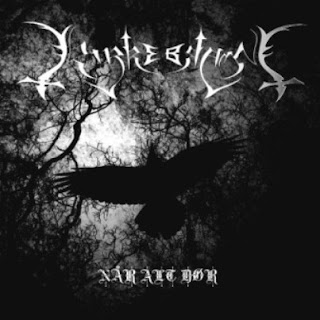 - We haven’t got so many reviews yet, but it looks like most people like what they hear. People
outside Norway are most exited.


4. Is the "Jakob" in the song "Jerva-Jakob" the manipulating patriarch from the old testament
or is it some old friend?


- Jerva jakop is the story about the last man in sogn who was convicted to death by
decapitation. He tried to murder his wife by pushing her out of a cliff. Its Old Norwegian
history from sogn.

5. Your split with Svikt was great if i may say so, are you guys close acquaintances or was
it a label thing?

- Hrafn who is guitarist and creator of svikt are playing lead guitar in kirkebrann. We just
wanted to make a killer split and realized it on the label they are sign on.

6. How did the gig with Djevelkult och Skaur go? Any more plans to play together?

- The gig went great. We enjoyed playing in Lillehammer. It was the first time we met skaur
and it was a great band. Djevelkult is a great band we are going to play a lot more together
with them. Djevelkult and kirkebrann are trying to help each other getting gigs so. We play
and drink well together he he

- I don’t know and I don’t care. There are so many opinions about this and that. Let people
make up their own mind.

8. One time in the 90´s i had the opportunity to feel the smell of a church burning...sweet
memories. Have you had the same "luck" like that?

- Only a burning house after some party many years ago. He he


9. The cold and hatefull music that you create is good and i feel that it can be both empowering
and depressing. (like it should be) but how do your selfs feel like after a gig or after listening
to your own stuff? Do you feel you have reached the goal you intended?


- When I drink booze and create music it feels great, when the music works with the whole
band it feels even greater. Some of the songs on the album make me feel like I have reach
the goal yes. I get tired of my own stuff sometimes but some of the songs are classic.

10. So how does the plans look for this year? Any last bleak words?

- The plan was to play much live but you never now. Maybe we will record a new album.
Hopefully maybe next year we can get our asses out in Europa.